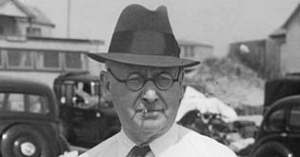 Robert Wiene, born April 27, 1873, in Breslau, studied law in Berlin and Vienna from 1894 to 1896 before he changed his subject and became a Doctor of Philosophy. In spring of 1908 he became the head of Kleines Schauspielhaus in Vienna for a short period of time and was a leaseholder in the foundation of Neue Wiener Bühne, after Kleines Schauspielhaus was closed in August. But in May 1909 he already left the management of Neue Wiener Bühne.

From 1912 on, Wiene worked in Germany and Austria as a writer and director in the film business. From 1915 on, he worked as a dramaturg and writer for Messter-Film GmbH, wrote screen plays for comedies of errors, melodramas, and other light entertainment movies. Until 1919, Wiene participated in altogether 18 Henny Porten films, and even directed three of them. Furthermore, he wrote screen plays for Deutsche Bioscop and Graf Kolowrat's Sascha-Filmindustrie in Vienna where he also worked as a director in 1919.

In 1919/20, he directed "Das Cabinet des Dr. Caligari" ("The Cabinet of Dr. Caligari") for Erich Pommer's Decla-Film in Berlin. The screen play was written by Carl Mayer and Hans Janowitz, the constructions were set up by Hermann Warm, Walter Reimann, and Walter Röhrig, and the main actors were Conrad Veidt and Werner Krauß. The film about insanity, hypnosis, and murder, a classic film of the Weimar Republic cinema and one of the few "authentic" expressionist films became a big box office hit in Germany and abroad after a massive propaganda campaign ("You have to turn into Caligari").

After several more screen plays, including F. W. Murnau's "Satanas", Wiene tried to stylistically continue his "Caligari" success with "Genuine", but the film flopped. In 1922, Wiene set up the production company Lionardo-Film that produced the Dostoevsky adaptation "Raskolnikow" ("Crime and Punishment") which was followed in 1923 by the religious monumental film "I.N.R.I." ("Crown of Thorns"). In "I.N.R.I.", Wiene re-enacted the life story of Jesus Christ with a cast of stars including Henny Porten, Asta Nielsen, and Werner Krauß.

In 1924, Wiene went to Vienna where he became the artistic director of Pan-Film AG together with the writer Ludwig Nerz. Their first collaboration was "Orlacs Hände" ("The Hands of Orlac") based on the fantastic novella by Maurice Renard, with Conrad Veidt in the leading role of a genius pianist who after an accident is transplanted the hands of a murderer and starts to believe that he is also a murderer. In 1925, Wiene also finished the elaborate opera film "Der Rosenkavalier" in the Schönbrunn studios, as well as the court romance "Die Geliebte" in 1926. Then, Wiene directed "Die Frau auf der Folter" ("Scandal in Paris") and "Die große Abenteuerin" ("The Amateur Adventure"), both starring Lily Damita in the leading role, and several comedies.

His first sound film "Der Andere" ("The Other"), a remake of Max Mack's film from 1913, is a variation on the Jekyll & Hyde motif, starring Fritz Kortner in the leading role of attorney Hallers. Wiene's spy film "Taifun" was banned in Germany in 1933 and was not released before 1934 under the title "Polizeiakte 909" after several cutting restraints were met.

In spring of 1934, Wiene made one last film in Budapest, before he emigrated to England because he was prosecuted as a Jew. But in 1936 or 1937, Wiene went to France, probably because he saw an opportunity to do a remake of "Das Cabinet des Dr. Caligari" with Jean Cocteau. Wiene did not direct another film until 1938 when he directed the spy film "Ultimatum" starring Erich von Stroheim. But on July 17, 1938, Wiene died in Paris shortly before the shooting was finished. The film was completed by Robert Siodmak.