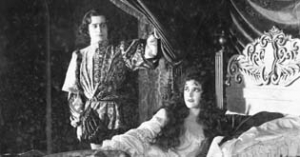 Period piece about jealousy and revenge in the Borgia family: Cesare Borgia wants to murder Alfonso of Aragon, the lover of his sister Lucrezia, whom he desires himself. His own brother and the peasant girl Naomi fall victim to Cesare′s furious temper, before he finally has Alfonso killed. Even an intervention by the pope can′t stop him, and he chases Lucrezia to the castle of the Sforza family. Eventually, Cesare has a duel with Giovanni Sforza, in which both men are fatally wounded.