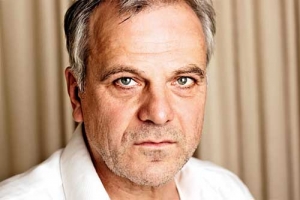 Bernhard Schütz, born in 1959, grew up in Leverkusen and studied acting at the Hochschule der Künste (HdK) Berlin. From 1988 to 1993 he had an engagement at the Theater Basel, followed by an engagement at the Hamburg Schauspielhaus. In 1994 Christoph Schlingensief brought him to the Berliner Volksbühne, where he was a permanent member of the ensemble until 2008 and worked with René Pollesch and Frank Castorf.

Schütz had his first small film and television roles at the end of the 1980s, but it was not before the turn of the millennium that he has been appearing more regularly in front of the camera. His most important works include the docu-drama "Die Stunde der Offiziere" (TV, 2004) about the Hitler assassination on 20 July 1944, based on a script by Hans-Christoph Blumenberg; his role as an investigator in the highly acclaimed but short-lived crime series "KDD - Kriminaldauerdienst" (2007-2008); the thriller "Die Frau aus dem Meer" (TV, 2008) starring Ulrich Tukur and Hanns Zischler; and his part as the father of a football fan in the drama "66/67 Fairplay war gestern" ("66/67: Fairplay Is Over", 2009).

He had an unusual part in the tragicomedy "Sohnemänner" (2011) as a man whose life partner kidnaps his own grandmother out of concern for her. He received critical acclaim for his role as the helpless colleague of a terminally ill family man in Andreas Dresen's "Halt auf freier Strecke" ("Stopped on Track", 2011). Also in 2011, the drama "Das System - Alles verstehen heißt alles verzeihen" ("The System", 2011) celebrated its premiere. In the film Schütz played an inscrutable lobbyist who wants to enlist the young son of a deceased colleague for his own purposes. For this role, Schütz was nominated for the German Film Award 2012 as Best Supporting Actor.

He also had important roles in Frauke Finsterwalder's biting portrait of Germany, "Finsterworld", (2013) as a family man driving his huge SUV on the motorway and as the unscrupulous leader of the Special Operational Units in the police thriller "Wir waren Könige" ("The King's Surrender", 2014). Alongside Rosalie Thomass, he played a leading role in the American production "The Dog Wedding" (2015), as the strict father of a businesswoman who falls in love with a professional wrestler.

Mainly, Schütz continued to be involved in a large number of television productions. He has been playing guest roles in series like "Tatort" and "Ein Fall für zwei", and appeared in the title role of the four-part comedy series "Eichwald, MdB" from 2015 through 2019. As head of the Federal Office for the Protection of the Constitution he was part of the main cast of the spy series "Berlin Station" (DE/US 2016).

In addition, Schütz has been regularly appearing in ambitious TV movies. Among his most important works are Nina Grosse's "In der Falle" (2014), which portrays the so-called "gigolo affair" of BMW heiress Susanne Klatten with an impostor; the Fritz Bauer drama "Die Akte General" ("The General Case", 2016), with Bernhard Schütz as head of the Chancellery Hans Globke; and Marc Bauder's financial world thriller "Dead Man Working" (2016), in which he played a lawyer.

On the big screen Schütz was seen again in spring 2017, as a retired teacher in the ensemble of the tragicomedy "Einsamkeit und Sex und Mitleid" ("Sex, Pity and Loneliness") as well as in small roles as the father of the young main character in "Axolotl Overkill" (2017) and as a West German civil servant in the GDR drama "Adam und Evelyn" ("Adam & Evelyn", 2018).

Following this, Schütz mainly appeared on TV again. He was seen in numerous series guest roles, for example in the third season of "Babylon Berlin" (2019), and he continued  to play the title role of the comedy series "Eichwald, MdB" until 2019. He had leading roles, for example in Wolfgang Murnberger's TV tragicomedy "Nichts zu verlieren" (2018), as a member of a mourning travel group taken hostage by two hoodlums, and in the much-praised drama "Winterherz - Tod in einer kalten Nacht" (2018, TV), as a grieving father. Filmmaker Dror Zahavi cast him as the former German chancellor Helmut Schmidt in the historical drama "Das Geheimnis der Freiheit" (2020), about the struggle of manager Berthold Beitz and historian Golo Mann to find the right way to deal with the past of the Krupp dynasty.

In spring/summer 2020, Schütz once again stood in front of the camera for a feature film: the comedy "Das schwarze Quadrat" ("The Black Square") is about two art thieves who steal the famous Malevich painting of the same name.