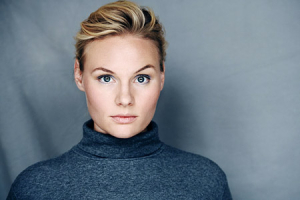 Rosalie Thomass, born August 14, 1987, already entered the stage during her school days. She was not only the member of a rock band but also started to perform at Munich's Volkstheater in 1995. In 2001, Thomass became a cast member of the youth theatre group at Munich's Kammerspiele. At the same time, she also took professional acting lessons.

After playing minor roles in several TV movies, Thomass soon made her breakthrough performance in the leading female role of the TV crime movie "Polizeiruf 110 – Er sollte tot". Directed by Dominik Graf, Thomass portrayed a psychologically unstable prostitute who gets involved in a murder case. This role won her German cinema's promotional award, a Grimme award, the Bavarian TV award, and a German film award.

In 2007, Thomass made her movie debut in Marcus H. Rosenmüller's Coming-of-age-film "Beste Zeit". She also had a leading role in the films' sequel "Beste Gegend". Her third role (albeit a very small one) under the direction of Marcus H. Rosenmüller was in "Räuber Kneißl". In October 2008 Rosalie Thomass could be seen in Max Färberböck's drama "Anonyma – Eine Frau in Berlin" ("A Woman in Berlin"), based on the bestselling book of the same title.

She played the young girlfriend of an aging stage director in "Bergfest", which premiered at the 2008 Cairo Film Festival and won several awards before being released in Germany in 2010. In the meantime, Thomass appeared in a row of high-profile TV productions: she played the wife of German chancellor Helmut Kohl in the biopic "Der Mann aus der Pfalz" (2009), the lover of protagonist Frank Lehmann in the screen adaptation of the bestselling novel "Neue Vahr Süd" (2010) and the assistant to Christoph Maria Herbst's police detective in "Kreutzer kommt" (2010). Moreover, she received nominations both for the German and the Bavarian Television Award for her performance in "Die letzten 30 Jahre" (2010).

On the big screen, Thomass starred in the comedy "Eine ganz heiße Nummer" ("Hot Line", 2011) and the offbeat "Kohlhaas oder die Verhältnismäßigkeit der Mittel" ("Kohlhaas Or The Proportionality of Means", 2012). She also had supporting roles in the tragicomedy "Das Leben ist nichts für Feiglinge" ("Life Is Not For Cowards", 2012) and the children's film "Die Abenteuer des Huck Finn" ("The Adventures of Huck Finn", 2012). Following turns in the TV productions "Kreutzer kommt ... ins Krankenhaus" (2014) and "Weiter als der Ozean" (2014), Rosalie Thomass reprised her role as feisty Jo for "Beste Chance" (2014), the third and final film in Marcus H. Rosenmüller's trilogy about the coming-of-age of two girls from rural Bavaria.

She played a strong-headed 19th century farmer in the crime drama "Die Frau aus dem Moor" (2014, TV), and a witness at the Nuremberg War Criminal Trials whose husband is one of the defendants in Matti Geschonneck's "Das Zeugenhaus". Thomas next starred in the tragicomedy "Taxi" (2015), playing a young cab driver who has to deal with a bunch of peculiar passengers. The same year, she was cast as the lead of Doris Dörrie's "Grüße aus Fukushima". In the film, she portrays a young, heartbroken woman who joins a charity project and travels to the disaster area in the Japanese city of Fukushima. For this role she was awarded the Bavarian Film Award and the Best Acting Award of the Odessa International Film Festival. She also received a nomination for the German Film Award.

Her role as a mother fighting against medical ignorance and for the life of her daughter in Hans Steinbichler's "Eine unerhörte Frau" ("An Unheard Woman", 2016, inspired by true events), was also a great success. Thomass won the German Academy of Television Award and the German Actor Award and was nominated for the prestigious Grimme Award.

She had leading TV roles as an alleged crime victim in "Rufmord" (2018) and as a villager in the highly acclaimed social drama "Unterleuten - Das zerrissene Dorf" ("Unterleuten – The Torn Village", 2020). For her performance in the thriller "Jackpot", as the finder of a suitcase of money hunted by a killer, she received a special award for "outstanding acting performance" at the 2021 Baden-Baden Television Film Festival.

On the big screen, Thomass played a lead role in the sequel "Eine ganz heiße Nummer 2.0" (2019), was the main character's crush in the comedies "Die Känguru-Chroniken" (2020) and "Die Känguru-Verschwörung" (2022), and had the lead role of a recently dumped wife in the comedy "Jagdsaison" ("Hunting Season", DE/DK 2022).