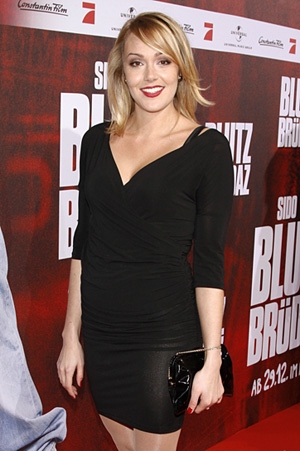 Alwara Höfels was born on 6 April 1982 in Kronberg/Taunus; her parents are the actors Klara Höfels and Michael Greiling. From 2002 to 2007 she studied acting at the Hochschule für Schauspielkunst 'Ernst Busch' in Berlin. In the 2006/2007 season she became a member of the ensemble of the Deutsches Theater Berlin, where she appeared in stage productions of "A Midsummer Night's Dream", "Caligula" and "Baal", among others.

Höfels made her screen debut in 2007 in Til Schweiger's box-office hit comedy "Keinohrhasen", as a colleague and good friend of Nora Tschirner's main character. In the following years she had leading roles in the "Tatort" episode "Architektur eines Todes" (2009) and the TV comedy "Mein Flaschengeist und ich" (2009). In the re-enacted scenes of the documentary film "Rahel – Eine preußische Affäre" (2009, TV) she played Pauline Wiesel, friend of Rahel Varnhagen and life companion of Prince Louis Ferdinand of Prussia.

In 2009 Höfels left the ensemble of the Deutsches Theater and focused entirely on her TV and film career. In Feo Aladağ's multi-award-winning drama "Die Fremde" ("When We Leave", 2010) she was the best friend of a young German-Turkish woman (Sibel Kekilli), whose life is threatened by her own brothers. In the musical comedy "Blutzbrüdaz" (2011) she portrayed the girlfriend of an ambitious amateur rapper (Sido), together with Elyas M'Barek she played a wildlife filmmaker duo in the children's film "Fünf Freunde" ("The Famous Five", 2012). Alongside M'Barek she was also seen in the comedy hit "Fack Ju Göhte" ("Suck Me Shakespeer", 2013) and the sequel "Fack Ju Göhte 2" ("Suck Me Shakespeer 2", 2015), as a roommate of the strict teacher Sigi (Karoline Herfurth). She had a leading role as a worried mother in Sönke Wortmann's parents vs. teachers satire "Frau Müller muss weg!" (2015).

Following this, Höfels mainly appeared on TV. She played important roles in the comedy "Überleben an der Wickelfront" (2012) as well as in the "Tatort" episodes "Alles hat seinen Preis" (2012) and "Der Eskimo" (2013). In the comedy "Einmal Bauernhof und zurück" ("Sisters in Strife", 2014), she portrayed a dairy farmer's wife who, after the death of her parents, tries to run the family farm on her own. In the father-daughter story "Die Fischerin" (2014) she played a Berliner-by-choice who returns to her home village on Lake Constance. For this role and for her part in "Dr. Gressmann zeigt Gefühle" (2014), as a single mother in financial difficulties who drags a wealthy entrepreneur into a turbulent adventure, she was awarded the Hessian Television Prize. The witness protection programme thriller "Das Programm" (2016) also received very good reviews, with Höfels in a key role as a corrupt employee of the State Office of Criminal Investigations.

From 2016, Alwara Höfels and Karin Hanczewski formed the first female investigator duo in the long history of the "Tatort" series. Until 2018 she appeared in eight episodes of the popular crime series, before Cornelia Gröschel succeeded her. In addition, Höfels continued to appear in TV movies, for example as the mother of a highly gifted boy in "Mein Sohn, der Klugscheißer" (2016), and as the mother of twins in Lancelot of Naso's new adaptation of the children's literature classic "Das doppelte Lottchen" (2017).

She had further leading roles in two feminist dramas in 2018: In the drama "Aufbruch in die Freiheit" (2018), she played the sister of a woman (Anna Schudt) who joins the protests against the anti-abortion paragraph 218 in 1971. Also set in the 1970s was Wolfgang Murnberger's social comedy "Keiner schiebt uns weg" (2018),which was inspired by true events and in which Höfels played a woman worker fighting against chauvinism and for equal pay together with her peers. In Marco Petry's comedy "Mein Freund, das Ekel" (2019), Höfels played a lively woman who, in exchange for freedom from rent, is supposed to look after an extremely grumpy pensioner in a wheelchair (Dieter Hallervorden).

On the big screen Höfels played supporting roles in Marco Petry's comedy "Meine teuflisch gute Freundin" ("How to Be Really Bad", 2018) and in the Frank Goosen film adaptation "So viel Zeit" ("Comeback", 2018). She starred as the mother of a terminally ill girl in "Das Leben meiner Tochter" (2019) and as the mother of a resourceful amateur detective in the children's film "Max und die Wilde 7" ("Max & the Wild Bunch", 2020).