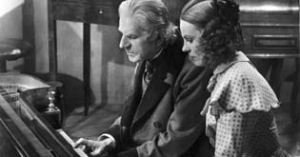 At her father′s Leipzig school of music, Clara Wieck meets the gifted Robert Schumann. Against her father′s will who is completely focussed on her career as an artist, Clara falls deeply in love with Robert. She finally breaks with her father when she returns to Leipzig after a successful concert tour as a pianist alongside Franz Liszt to marry Schumann. Clara is more than happy to focus completely on her family. Robert, her husband, writes some of his best musical pieces during this period. Then Liszt urges her to go on a concert tour again. Thus, the married couple takes to travelling. But the vagrant life does not suit Robert Schumann who is ill. He starts suffering from depressions. His condition deteriorates until Schumann loses his vital energy and becomes more and more melancholic. When Clara visits him in a sanatorium shortly before his death, Schumann does not even recognize her anymore.