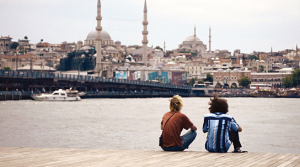 Emil von Schönfels was born in Berlin in 2002. He gained his first acting experience at the Deutsches Theater Berlin in 2010. He made his big screen debut with a leading role in the children's film "Sputnik" (DE/BE/CZ 2013), set in the GDR, as an initially aligned boy who then joins a gang of rebellious children. Small appearances followed as a young sniper in George Clooney's World War II film "Monuments Men" (DE/US/GB 2014) and as a paperboy in the Nazi resistance drama "Jeder stirbt für sich allein" ("Alone in Berlin", DE/FR/GB 2016).

Emil von Schönfels played a leading role in the feature film adaptation of the novel "Räuberhände" ("Stambul Garden"), as the sheltered son of a bourgeois family who longs to break free and embarks on a journey to Istanbul to help his best friend find his father.

Besides acting, Emil von Schönfels is one half of the DJ and musician duo "Youngbois".