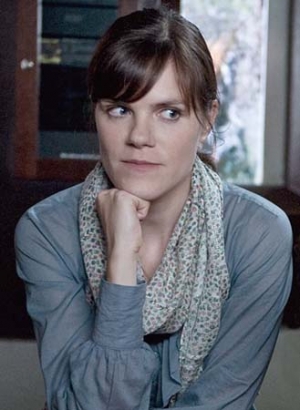 In 1999, Haberlandt became a cast member of Schauspiel Hannover but went to Hamburg's Thalia Theater where she worked as cast member from 2000 to 2006. Under director Michael Thalheimer, Haberlandt caused a stir in a controversial production of "Liliom", among others. Furthermore, Haberlandt won the 2003 Alfred Kerr actor's prize for her performances in "Zeit zu lieben Zeit zu sterben" und "Liebelei". Since the start of the 2006/07 season, Fritzi Haberlandt is regularly seen as a cast member of Berlin's Maxim Gorki theatre.

From 1999 on, Haberlandt starred in several striking movie parts. She won the Bavarian film prize for "Best new actor" for her performance in Rainer Kaufmann's "Kalt ist der Abendhauch" ("Cold Is The Evenig Breeze") based on Ingrid Noll's novel. In addition, the part of an inconspicuous student in the comedy "Liegen Lernen" ("Learning to Lie") won her the German film prize for "Best supporting actress". She was also praised for subtle and unsentimental portrait of a blind woman in Lars Büchel's tragicomic love story "Erbsen auf halb 6" ("Peas at 5:30"). But despite her movie success, Haberlandt continues to perform on stage. While she was seen in a small, but significant part in Detlev Buck's children's film "Hände weg von Mississippi", Haberlandt at the same time starred in a leading role in "Die Leiden des jungen Werther" at Maxim Gorki theatre.

In 2009/2010, Haberlandt guest-starred in TV productions like "Die armen Kinder von Schwerin" – a feature-length episode of the "Polizeiruf 110" series –, Bernd Böhlich's comedy "Krauses Kur", as well as "Tote Männer" and "Wie einst Lilly", the latter two being feature-length films in the popular "Tatort" TV-series. She returned to the big screen with "Das Blaue vom Himmel", followed by the female lead in the romantic comedy "Eine Insel namens Udo", which opened in June 2011.

Also in 2012, she had a supporting role in the tragicomedy "Transpapa", the story of a teenage girl who seeks out her transsexual father. Haberlandt then starred opposite Mario Adorf in "Die Libelle und das Nashorn" ("The Rhino And The Dragonfly"), playing a young author who spends a memorable night with an aging movie star.