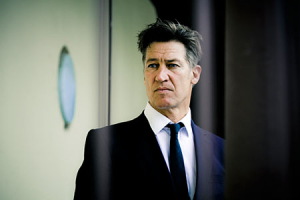 Born on July 11, 1959 in Gries am Brenner in Austria Tobias Moretti (in fact: Tobias Bloéb) enrolls at the Universität für Musik und darstellende Kunst in Vienna to study composing. A few terms later he quits in favour of acting lessons at the Otto-Falckenberg-Schule in Munich. After graduating he is hired by the Staatstheater Hannover, then spends some time at the Residenztheater in Munich and in 1986 he becomes part of the ensemble of the Münchner Kammerspiele. He is praised by audience and critics alike for his performance in several major roles, e.g. in the stage play "Troilus und Cressida", in "Katzelmacher" by Fassbinder or "Der Frosch" by Herbert Achternbusch. After a few guest appearances on stage in Vienna Moretti in 1995 debuts at the Burgtheater in a staging of Anton Tschechow's "Der Heiratsantrag".

In 1986 Tobias Moretti plays in a movie for the first time. In Hartmut Griemayr's biopic about artist "Wilhelm Busch" he has a small part as the young incarnation of the eponymous protagonist. Afterwards he can be seen as a supporting actor in several films, including the "Piefke-Saga" (2004). In 1994 he is introduced to a major audience by playing the leading part in the criminal investigation TV-series "Kommissar Rex". From 1994 up until 1998 he plays the investigator Richard Moser 43 times.

In 1996 Moretti plays his first leading part in a motion picture, the romantic comedy "Workaholic" by Sharon von Wietersheim. However, the film about a woman (Christiane Paul) who is trying to cure her lover (Moretti) from his frantic workaholism fails to succeed at the box office as well as in the eyes of the critics. After this Moretti, next to his work on stage, concentrates on his TV-career and more than once is applauded for his talent on screen by audience and critics alike. In "Todfeinde – Die falsche Entscheidung", a thriller by Oliver Hirschbiegel, he stars as a man, who by chance kills a drug lord and therefore gets in terrible danger. In Peter Keglevic's award-winning "Der Tanz mit Teufel" (2001), a two-parter about the infamous kidnapping of German industrialist Richard Oetker, he plays the role of chief investigator Kufbach. In Xaver Schwarzenberger's TV-movie "1809 Andreas Hofer – Die Freiheit des Adlers" (2002) he is the eponymous Tirol folk hero. Moreover, Moretti is celebrated by critics for playing Adolf Hitler in the half-documentary TV-drama "Speer und Er" (2005) about the controversial architect Albert Speer, which is directed by Heinrich Breloer.

At the same time Tobias Moretti continues his work for the theatre. He is, for example, part of the ensemble of the Salzburger Festspiele and the Schauspielhaus Bochum. In 2006 he receives the most important German theatre award, the Gertrud-Eysoldt-Ring awarded by the Deutsche Akademie der Darstellenden Künste for his outstanding performance in "König Ottokars Glück und Ende". Since 2009 he has been starring as "Faust" at the Burgtheater in Vienna. He also directs Haydn's "Il mondo della luna" at the Wiener Opernhaus "Theater an der Wien".

From 2006 on Tobias Moretti also appears on the movie screen again more often. Alongside Jessica Schwarz and Ulrich Thomsen he is one of the leading actors in the love-triangle "Der Liebeswunsch" (2006) by Torsten C. Fischer. In Sabine Derflinger's story of a marital crisis, "42plus", he is an important supporting actor, playing a big-mouthed harasser. In an unexpected move Til Schweiger casts him in a comic role in his medieval comedy "1 ½ Ritter – Auf der Suche nach der hinreißenden Herzelinde" (2008), in which Moretti is starring alongside his brother Gregor Bloéb. Afterwards, Moretti moves on to something completely different by accepting to play the part of actor Ferdinand Marian in Oskar Roehler's "Jud Süß – Film ohne Gewissen" (2010).

After turns in Lars Becker's "Amigo" (2010, TV) and the children's film "Yoko" (2011), he joined Sebastian Koch, Katja Riemann and Barbara Auer in the high-profile cast of "Das Wochenende" ("The Weekend"). His performance in the made-for-TV drama "Mobbing" garnered him a Best Actor nomination at the Bavarian Television Awards.

Following parts in "Die Geisterfahrer" (2012) and Til Schweiger's "Grossstadtklein", Moretti was one of the leads in "Das finstere Tal" ("The Dark Valley"), for which he won both the Bavarian Film Award and the German Film Award.

After the TV thriller "Brandnächte" (2017), Moretti appeared in the award-winning series "Bad Banks" (2018) in a signature role of his as the slick, corrupt board member of an investment bank. Joachim Lang cast him in "Mackie Messer - Brechts Dreigroschenfilm" ("Mack the Knife – Brecht's Threepenny Film", 2018) in the title role of the criminal Macheath, called Mackie Messer.

At the Cannes Film Festival in May 2019, Terrence Malick's Second World War drama "A Hidden Life" (US/DE) premiered with Moretti in a leading role as a pastor. "Deutschstunde" ("The German Lesson", 2019), an adaptation of the Siegfried Lenz novel for the big screen, in which Moretti had a leading role as a dissident artist and godfather of the young main character, also played during the Nazi era.