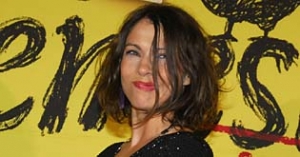 Jana Pallaske was born May 20, 1979, in Berlin-Treptow. She left school shortly before graduation and jobbed as barkeeper before she started to work at a casting agency. More or less accidentally, she got her first role as Sabine, a girl who is on her own, in "alaska.de". The character she portrayed in "Engel & Joe" is also a brash and self-confident girl that struggles along on her own and has to learn about life on the streets the hard way. Then, in "Was nützt die Liebe in Gedanken" ("Love in Thoughts", 2005), Pallaske played a totally different character: in Achim von Borries' drama she portrayed the shy Elli, who is longing for love.

In addition to several movies, Jana Pallaske is also regularly seen on TV, for instance in the "Tatort" episode "Schützlinge" (2004) or in the episode "Tod im Hochhaus" (2005) of the crime series "Ein Fall für Zwei". Further TV productions include "Rio Reiser – Auf der Suche nach der Wahrheit" for SWR, and the TV series "Maja Paradys" for Pro 7. Pallaske proved her versatility as an actress in films as diverse as Christopher Roth's "Baader" (2001-2002), where she played a kind of Baader groupie, Vanessa Jopp's "Komm näher" ("Happy As One", 2005-2006), or Tomy Wigand's "Polly Blue Eyes" (2003-2005) that saw Pallaske as a suicidal prison inmate. In Tobias Baumann's bestseller adaptation "Vollidiot" ("Complete Idiot", 2006), Jana Pallaske starred in a supporting role as a flight attendant. The film started in cinemas in the spring of 2007. At the beginning of 2008, Pallaske starred in the romantic drama "Berlin am Meer" ("Berlin by the Sea") alongside Robert Stadlober and Anna Brüggemann.

In 2009, the young actress stepped up another gear: She started the year with a supporting role in Hans Christoph Blumenberg's comedy "Warten auf Angelina", and followed that with leads in the American-Canadian Sci-Fi thriller "Screamers: The Hunting", the gangster romp "Kopf oder Zahl", the drama" "Phantomschmerz", the period piece "Zwölf Meter ohne Kopf", and the ensemble comedy "Männerherzen". She also had a bit part in Quentin Tarantino's "Inglourious Basterds" and appeared in "Something I Can Never Have". The following time, Pallaske took it a bit slower and appeared in only a few films, for example the apocalyptic Western "Snowblind" (2011).

Pallaske also sings (under the alias of Bonnie Riot) for the Berlin punk band "Spitting Off Tall Buildings" that published a record in September 2005. Until September 2006, she also hosted the news magazine "News Mag" for the music TV channel MTV.