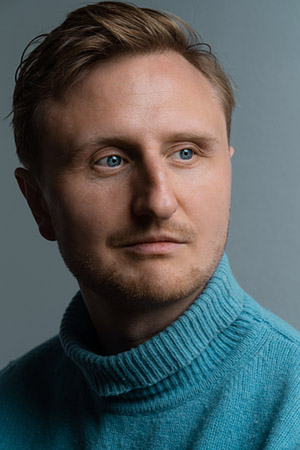 Michael Kranz was born in Ravensburg on April 17, 1983. His father was a senior physician at the Bad Schussenried Center for Psychiatry, which is why the family lived in a staff apartment on the hospital grounds at the time. As a 17-year-old student, Kranz went to the U.S., where he lived for a year on the Pine Ridge Indian Reservation and graduated from high school in 2001. Back in Germany, he attended the Gymnasium Studienkolleg St. Johann Blönried and graduated in 2003. After completing his acting training at the Otto Falckenberg School in Munich (2004-2008), Kranz began working as a freelance actor. He appeared on stage at the Munich Kammerspiele, among others, but succeeded primarily in cinema and television roles.

His first, smaller appearances were as a gendarme in Marcus H. Rosenmüller's "Räuber Kneißl" (2008), as a tutor in Michael Haneke's "Das weiße Band - Eine deutsche Kindergeschichte" ("The White Ribbon", 2009) and as a German soldier in Quentin Tarantino's "Inglourious Basterds" (2009). He played a German officer in Steven Spielberg's "War Horse" (US 2010), and a coachman in Rosenmüller's "Sommer der Gaukler" (DE/AT 2011). Joseph Vilsmaier cast him in the mountaineering drama "Nanga Parbat" (2010) in the supporting role of the extreme mountaineer Hans Saler.

Kranz had pivotal roles in Sebastian Stern's HFF graduation film "Die Hummel" (2010) as the son of a failed provincial entrepreneur (Jürgen Tonkel), as a member of a grunge band in "Local Heroes" (AT 2013) and as the cousin and comrade-in-arms of the title character in the award-winning Schnitzler adaptation "Fräulein Else" (DE/AT/IN 2013).

He played supporting roles, for example, as the court jester in "Das Märchen von der Prinzessin, die unbedingt in einem Märchen vorkommen wollte" (2013), as the best buddy of the main character (Jonas Nay) in the schizophrenia drama "Hirngespinster" ("Flights of Fancy", 2014), as SS-Unterscharführer Franz Xaver Lechner in "Elser" ("13 Minutes", 2015) and as a farmer in the fairy tale film "König Laurin" ("King Laurin", 2016).

From 2017 to 2019, Kranz played a town priest in the award-winning political satire series "Hindafing." In 2019, he won acting awards at the Queen Palm International Film Festival Palm Springs (USA) and at the Hyperwave Spring Awards in Los Angeles for his performance in the medium-length socio-critical sci-fi film "Falter." In 2020, he was seen in the miniseries "Oktoberfest 1900" (DE/CZ) as a scheming city councilman.

Parallel to his acting work, Michael Kranz studied documentary film directing and television journalism at the University of Television and Film (HFF) Munich. His social spot "MYborder's JOYfence" (2018), which promotes the fictional product "JOYfence", a kind of border fence to go, was awarded the First Steps Award and the Spotlight Student Award in gold and silver, among others. With "MYborder's JOYfence," Kranz wanted to make a plea for more cohesion in society and an open social dialogue.

Already in 2017, he began work on his HFF graduation film "Was tun", in which he went in search of a young prostitute from Michael Glawogger's documentary "Whore's Glory", a search that led him into the forced prostitution milieu of Bangladesh. During the filming, Kranz published an appeal for donations on Facebook and used the money raised to initiate a children's home and later an educational project for former forced prostitutes. Finally, the "Bondhu Project" emerged from this commitment, an association that works together with an NGO in Bangladesh for the rights of women and children in the brothels around Faridpur.

As an actor, while working on his own film, Kranz was in front of the camera in supporting roles for Uli Edel's historical family epic "Der Club der singenden Metzger" ("The Master Butcher", 2019, TV), the youth drama "Hannes (2020) and the "Tatort" episode "Das ist unser Haus" (2020), among others.

"Was tun" premiered at the online edition of Munich DOK.fest in May 2020. At the Biberach Film Festival, it won the Best Documentary Award; at the 2021 German Documentary Film Award, it was awarded the Haus des Dokumentarfilms Promotional Prize and the Audience Award of the Landesschau. In March 2022, "Was tun" opened regularly in cinemas.