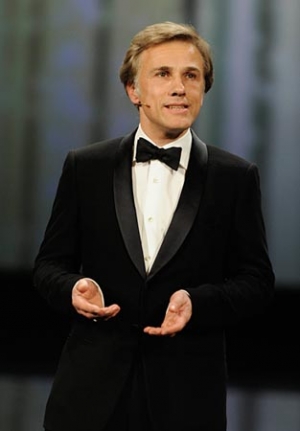 Christoph Waltz, born October 4, 1956, in Vienna, attended actor's training at Vienna's Max-Reinhardt-Seminar and at Lee Strasberg Theatre Institute in New York. In Vienna, he also studied voice at Akademie für Musik und darstellende Kunst. Since 1976, Waltz has been working as a theatre actor and performed at theatres in Frankfurt am Main, Salzburg, Hamburg, and at Vienna's Burgtheater, among other theatres.

In the early 1980s, Waltz started his film and TV career. He, for instance, played the role of Tristan in "Feuer und Schwert – die Geschichte von Tristan und Isolde" ("Fire and Sword", 1981). On TV, he made memorable performances in the leading role of Tom Toelle's Anabaptist drama "König der letzten Tage" ("A King for Burning", 1992) or as an alcoholic pop star in "Du bist nicht allein – die Roy Black Story" (1996) by Peter Keglevic, a role that won him the Bavarian TV award. In Marc Rothemund's film "Das merkwürdige Verhalten geschlechtsreifer Großstädter zur Paarungszeit" ("Love Scenes from Planet Earth", 1998), Waltz delivered a strong performance as a melancholic writer. In 1999, he made his debut as a director with the romantic TV comedy "Wenn man sich traut".

After repeatedly starring in international productions, Christoph Waltz caused a stir with his role as a Nazi officer in Quentin Tarantino's film "Inglorious Basterds". In May 2009, he won the Golden Palm as best actor at the Cannes film festival for his performance, followed by many other awards including the Oscar for Best Actor in a Supporting Role in march 2010.

In 2014, Waltz was honored with a star on the Hollywood "Walk of Fame" and a star on the Boulevard of Stars in Berlin. The following year, he received a special award for 'Best European Achievement in World Cinema' at the European Film Awards.

Waltz continued to star almost exclusively in U.S. (co-)productions. He played the diabolical villain Blofeld in "James Bond 007: Spectre" (GB/US/IT 2015), a wealthy and party-loving neighbor in the tragicomedy "Downsizing" (US 2017), a genius scientist in the science fiction film "Alita: Battle Angel" (US 2019) and the facilitator of a brutal manhunt in the action series "Most Dangerous Game" (US 2020).

In 2019, "Georgetown" (US) was theatrically released, with Waltz not only starring alongside Vanessa Redgrave and Annette Bening as a con man who marries a wealthy widow to gain influence, but also directing. The drama, based on true events, premiered at the Tribeca Film Festival in New York.

In 2021, Waltz was seen in the ensemble of Wes Anderson's eccentric "The French Dispatch" (DE/US) and again as Blofeld in the James Bond film "No Time to Die" (GB/US).