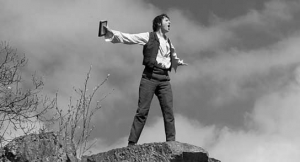 Home from Home - Chronicle of a Vision
Against the background of rural Germany in the middle of the 19th century when whole villages suffering from famine and poverty emigrated to faraway South America – Edgar Reitz tells a dramatic family and love story in his new feature film "Home from Home". The story centers on two brothers who one day have to make a final decision: leaving or staying?

Jakob, a character unusually romantically inclined for farm boys, dreams himself from his misery in a better world: a paradise in the tropical forests of Brazil. He is making plans to emigrate for good together with the love of his life, the daughter of an impoverished lapidary family from his village – and to live among strangers, to learn their language and to experience big adventures. The return of his brother from the Prussian military service however gives the impulse for events which will shake the love between Jakob and Jettchen abruptly and will steer Jakob’s life in an entirely different direction.

In memorable images of the great exodus of the Hunsrück farmers who in endless columns of highly loaded huge horse-drawn carts fight their way through the Hunsrück valleys – Edgar Reitz tells about an epoch in which Germany was an emigration country and people in search of another Heimat gathered all their courage and faith in a better future to set out into the unknown.

Filmed at original locations and supported by the local population, the picture follows the spirit of the world famous "Heimat trilogy" and opens a cinematic panorama which with outmost authenticity keeps to the ordinary people and their lives.