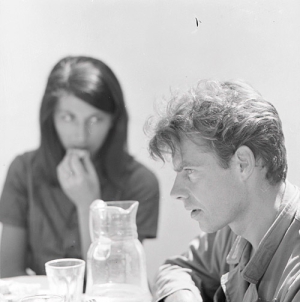 Towards the end of the Second World War, Stroszek, a German soldier, is wounded when partisans on the island of Crete launch an attack. After he has spent quite a while in a military hospital, he is detailed to the peaceful island of Kos in the Dodekanes, where compassionate superiors give him a quiet post so that he can sit out the war undisturbed. Together with his Greek wife and two other soldiers who have been discharged from military hospital, he has to guard a disused munitions dump in an old Venetian castle near the port of the island′s main town.


Only a small German occupying force is stationed in the town itself. The castle garrison have procured themselves some chickens and are living a life of ease. Soon, however, the paralysing monotony and isolation begin to leave their mark. Stroszek is increasingly distressed by the unaccustomed surroundings; his wife is completely unable to help him. One day when he is out on patrol, he suddenly goes mad, chases after his comrades at the castle, starts firing at the town and, in the end, attempts to destroy it with self-made firework rockets.


His battle ends in humiliation – for he merely succeeds in setting fire to a chair. For nearly two days he holds his entrenched position against friend and foe alike, by threatening to blow up the munition every time anyone approaches the castle. During the second night, Stroszek is finally overpowered by his own people.