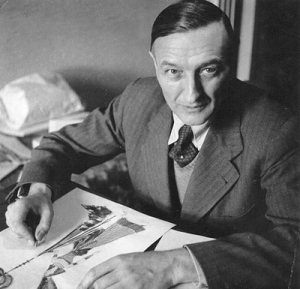 Walter Schulze-Mittendorff, born January 31, 1893 in Berlin-Tiergarten. At age fourteen he begins an apprenticeship in sculptural arts at the studio of Otto Rossius in Berlin-Steglitz, which he finishes in 1911. In 1913 he begins to study sculptural arts at the "Königliche Akademie für Bildende Künste zu Berlin" (Roayal Academy of Fine Arts, Berlin), where he receives the status of "Künstler-Einjähriger" in 1914.

After the first World War he continues his studies at what is now the "Akademie der Künste" (Academy of the Arts) in Berlin, and in 1920 he is accepted into the "Meisteratelier" (Masterclass) of the Academy of the Arts. The same year he receives the Academy"s "Dr. Paul Schultze-Preis für Bildhauerei", and in 1923 he is awarded the "Rome-Price".

In 1920 his fellow student and friend, the painter and film architect Robert Herlth, introduces him to Fritz Lang who is looking for a capable sculptor for his film "Der müde Tod" (The Weary Death, or "Destiny", as it is known by its English title) in connection with the production of the plastic elements. The encounter with Fritz Lang marks the start of Schulze-Mittendorff"s lifelong œvre with the German film.

In 1925 Fritz Lang engages the sculptor"s skills for the plastic elements in the film "Metropolis". Schulze-Mittendorff creates the Machine Man "Maria", the head of "Hel", the "Seven-Headed Phantastic Beast", and the figure group "Death and the Seven Deadly Sins". In 1932 he works for one of Lang"s films for the last time, where he creates the characteristic looks of Dr. Mabuse, with his mask for "Das Testament des Dr. Mabuse" ("The Testament of Dr. Mabuse").

After the national socialists" seizure of power in 1933 he creates, in 1935, the sculptures for the film "Amphytrion" and also participated in the set"s costume design. In 1940 he signs a contract as costume designer with "Terra-Filmkunst GmbH".

After the end of World War II he continues with his film work in 1947 with the German film production company DEFA, which is later to become the state film monopoly of the German Democratic Republic, where he becomes the chief costume designer. In 1962, barely a year after the erection of the Berlin Wall, his contract ends, and he being a citizen of West-Berlin, the contract is not extended.

From 1962 until 1968 Walter Schulze-Mittendorff works as a freelance costume designer, he participates in 18 West German film and television productions. In 1964, Lotte Eisner comes to visit him and requests that he rebuilds the Machine Man "Maria" from the film "Metropolis" for the Cinémathèque Française. This second figure that he created is now situated at the film museum of the Cinémathèque Française in Paris.