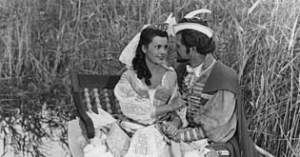 It is the year 1703. The Nordic wars are raging since 150 years. Poland is fighting against the troops of August the Strong. Against this historical background the poor student Simon, who dashes around the country with his guitar to earn money for his studies, meets Jan, a freedom fighter on the run from Saxon occupying forces. Jan escapes unto the same carriage in which Simon is travelling. The carriage belongs to the comital family Kowalska. Soon, both men lose their hearts to the Kowalska daughters Laura and Bronislawa. Together, they travel to Krakow to attend a festivity hosted by the nobleman Ollendorf. After their arrival, Ollendorf incurs the wrath of the countess by molesting Laura. Ollendorf seeks for revenge and plans to marry the countess to the student, whom he dresses as a prince. Simon and Jan, however, refuse to participate in the evil game and turn the tables on Ollendorf: In the end, the clumsy oppressor is exposed and expelled.