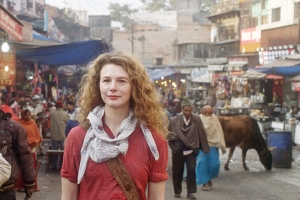 After "Beste Zeit" ("Best Times") and "Beste Gegend", "Beste Chance" concludes Marcus H. Rosenmüller's film trilogy about two girls from the Bavarian countryside. Five years have passed since Jo and Kati graduated from school and saw each other: Jo went on a world trip and now seems to have settled down in India, while Kati is preparing for her college exams in the big city. But when she receives an apparently alarming message from Jo, she immediately wants to help her best friend. Since no one from their old circle of friends wants to come along, Kati sets out all alone for the Ashram where she suspects Jo to be. Yet as it turns out, Jo isn't in trouble at all but already on her way back home. Once there, the spontaneous girl causes quite a stir – just like she used to do.