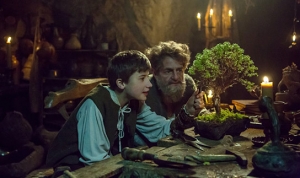 Fantasy movie based on an old folk tale. 16-year-old Prince Theo has a problem: He is too small and too weak for his age – at least in the eyes of his father King Dietrich, who only deems a strong warrior fit for the throne. In order to test him, he sends Theo on a quest to the mountains. There, Theo meets dwarf king Laurin, whom Dietrich banned from the kingdom along with his people a long time ago. Since then, the dwarves have been grooming beautiful roses in the mountains, while nothing grows in Dietrich's realm. Theo and Laurin become fast friends, and the prince learns how one prevails against restrictions and rigid conventions.