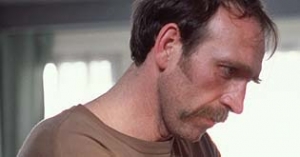 Jochen Nickel, born April 10, 1959, in Witten, became a road builder after finishing school. He worked for four years in road construction and was not drawn to acting before he incidentally met with the ensemble of Theater Witten. In 1989, Nickel played his first role in Roland Emmerich's TV series "Rote Erde". He has never attended actor's training. "The only thing I ever earned a degree in has been road building," Nickel once characterised his professional career. In following years, the autodidact played in films of some of the most renowned and successful directors of German Cinema, like in Dominik Graf's "Spieler" ("The Gamblers"), Doris Dörrie's "Happy Birthday, Türke" ("Happy Birthday!"), or Joseph Vilsmaier's "Schlafes Bruder" ("Brother of Sleep").

With his clear-cut, but furrowed looking face with its at times sensitive, at times radiating eyes, Nickel seems to be predestined for the roles of cool outsiders, like the one he plays in the elaborate TV pirate movie "Stoertebeker" alongside Ken Duken. Although he almost always portrays "simple" and down-to-earth characters, Jochen Nickel is versatile enough not to be restricted to a certain role cliché. Instead, he played an amiable drayman in Peter Lichtefeld's "Zugvögel – Einmal nach Inari" ("Trains 'n' Roses"), and has been similarly convincing as a gangster in "Die Mutter des Killers" ("The Killer's Mother") or as an alcoholic and father in the boxing drama "Elefantenherz" ("Elephant Heart"). In "Wahrheit oder Pflicht" ("Truth or Dare") Nickel appears in a prominent minor part as the lower middle-class father of a high-school graduate, who does not notice that his daughter has been kicked out of school one year before her final exam.