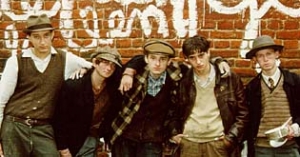 Cologne towards the end of the Second World War. The city is in ruins, everyone is afraid, many are dead. It is a time of great inhumanity. Cologne’s young Edelweiss Pirates refuse to submit to the pressure of the Nazi regime. They fight with the Hitler Youth and scrawl anti-war propaganda on walls. Karl is an Edelweiss Pirate; his younger brother, Peter, is in the Hitler Youth movement. The two young men have been alone ever since their mother’s death in a bombing raid; their father is serving at the front, and their older brother, Otto, has been killed in action. Otto’s financée, Cilly, is doing her best to survive the war with her children. Carl is trying to help her.


The Edelweiss Pirates are hiding a wounded concentration camp refugee named Hans at Cilly’s place. Cilly has fallen in love with Hans. When the boys’ father is also killed in action Peter comes to join his brother at Cilly’s, where Hans soon becomes his idol. Hans and a number of youths plan an attack on the Gestapo. Karl refuses to take part. After the local Gestapo leader is shot and killed, the plot is discovered in a raid. The Gestapo storm Cilly’s house and find two Jewish women and the arsenal of weapons. An attempt to free Cilly fails with the result that most of the Edelweiss Pirates are caught. Karl tries to save Peter but ends up betraying him, and they are both tortured. But Peter is determined not to let Hans down; he remains steadfast right to the bitter end – for Edelweiss Pirates are loyal.

This film is loosely based on actual events that took place in Cologne’s Ehrenfeld district in Autumn 1944. As Niko von Glasow comments: “Although the events in the film actually did take place, they were, in fact, much crazier and even more complex. We merged several of the figures and gave some people new names. But a drama doesn’t necessarily have to present the historical truth. We felt it was more important for the film to breathe new life into our parents’ and grandparents’ experiences.”