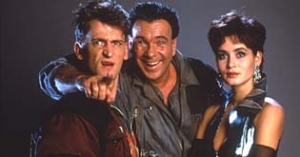 We are in the year 2417. Rio Kowalski is in his clapped-out shuttle approaching the space station Katanga when he picks up a radio message from the Titanius which is about to crash.

Evidently, nobody knows the configurates for the galactic shipwreck...except for Rio, his faithful, but rather ancient replicant Max, and Angie, a shady, but maddeningly beautiful lady on the run from her nasty bodyguard Garcia. Together, they want to pinch the Titanius payload which is worth 50 billion dollars. But, first of all, Kowalski must get his shuttle back in working order, Max has to go into the ring against fighting replicants, and Angie has to deal with the greasy custom′s boss. The mutant Spike helps them spectacularly to escape and, with Max′s help, Angie is also able to shake off her irritable pursuers. While Angie and Rio get closer to each other (al- though the girl reveals that she is a replicant and pleasure model) and Max has to fight with unfamiliar surges of wild jealousy, they approach their greatest adventure in a nose dive. Between the dunes of a desert planet a surprise awaits man, mutant and replicant ...