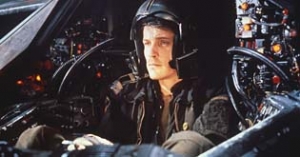 Although, the science fiction film "Moon 44" is the last film director Roland Emmerich finished in Germany, he already had an eye toward the international market as the film was made completely in English, financed mainly by US money, and starred English speaking leading actors like Michael Paré, Brian Thompson, and Malcolm McDowell.
The story blends elements of the prison film with those of air force films and puts them in space on the resource moon 44 of ′Galactic Mining Corp.′, a futuristic conglomerate that is in a war for galactic resources with a rival company. Stone (played by Paré), an undercover investigator, is sent to investigate the disappearance of excavation robots and is channeled in with a group of prisoners that were press-ganged to defend moon 44. On site, tensions develop that lead to the death of two men but in the heroic-forlorn final battle against the drones of a faceless enemy the group teams up – and on top of that, Stone discloses the traitor who comes from their own ranks.