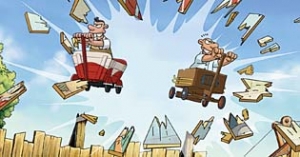 Fifth screen adventure of the legendary comic book hero – this time including a self-reflective storyline, which focuses on "Werner" creator Brösel: He is recounting the history of the series, from the beginning of the lifetime rivalry between Holgi and Werner, who were already competing in prams, up to the infamous Hartenholm race. In between, he remembers the numerous whimsical episodes involving Werner and his friends, who are in constant conflict with the police due to their love for illegally tuned motorcycles.
Alas, when Brösel finally finishes his book, he comes to the shocking realization that people aren′t interested in his comics anymore. Instead, everyone seems to be crazy for Japanese mangas. But then the news of Brösel′s alleged death in a bathing accident causes a huge "Werner" revival, which is shamelessly exploited by Brösel′s greedy publisher.