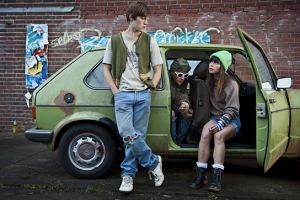 E, A, G, C – this is the signature riff of the song Paul Thomas wrote for Saskia, the most popular girl in school. Alas, she still ignores him like she did for years now. Nevertheless, the 17-year-old still believes in his composition and submits it to several international record companies. Maybe if he becomes a rock star, Saskia will finally be impressed. Yet a few months later, he makes a shocking discovery: His song for Saskia has been released as "Smells Like Teen Spirit" on the chart-busting album "Nevermind" by Nirvana. Paul Thomas feels betrayed and goes on an odyssey across Germany to confront Nirvana and their frontman Kurt Cobain, who are currently touring the country, with the copyright infringement. Not realizing that his new travel acquaintance Tolle might just be what he's been looking for all along, Paul Thomas becomes more and more furious until he sees only one possible option: to kidnap Kurt Cobain.