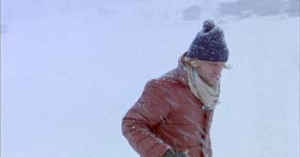 A tale of love and other forgotten ideals in the early 80s.
Love and politics were inseparable in the 80s, especially in West Germany, where friends, lovers and families would chant anti-imperialist slogans in endless protest marches.

Politics, however, is the last thing on the minds of Ingo and Nadia on this winter weekend in 1983. They′ve come to Nadia′s mountain cabin to discuss – or dissolve – their relationship. But before Ingo can begin to pour out his soul, a rowdy band of holidaymakers suddenly bursts in upon them – all politically active friends of Nadia′s brother Knut. Ingo is irritated, but worse is yet to come: Knut has apparently been arrested. As the group debates whether it is politically correct to have fun under such circumstances, Ingo finds himself drifting away from Nadia. Little by little, he is sucked into a community where people′s hearts and minds are like strangers without a common language...