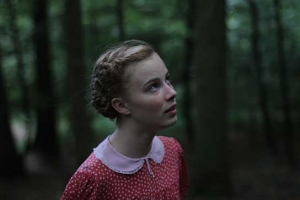 It is spring 1945, Germany has surrendered. Hour Zero. 14-year-old Lore's parents have vanished, her mother gone to stand by her husband, a senior SS officer interned by the Allies. With the country in ruins, divided into sectors, Lore is forced, like millions of others, to undertake a 900 km cross-country trek, from the Black Forest in the south to Hamburg in the north, to bring herself and her four siblings to the safety of their grandmother's. It is to be an epic journey that challenges every notion they hold of family, love and friendship.

On the road, days turn into weeks and what begins as an adventure becomes a ghostly journey into the heart of darkness of a wrecked country that is only unwillingly able to look the horrors of its own actions in the eye.

Still lacking a sense of what has transpired in the concentration and death camps, Lore realizes something terrible must have happened. She comes to feel increasingly that her parents must have been part of a crime, the scale of which she is still a long way from grasping. The paths of Lore, baby Peter, Liesel (11) and the twins Jürgen and Günter (8) cross those of Thomas, an emaciated young man of erratic behaviour who has a number tattooed on his forearm. It is unclear where he comes from and where he is going. But his persistence, disarming manner and unexpected moments of kindness slowly wins the children's confidence, but is he to be trusted?

At the end of the film Lore will reach her destination and Thomas' dark secret will be revealed. Too much will have happened to be put into words. Lore and her siblings might have returned to the security of their family but nothing will ever be as it was before.