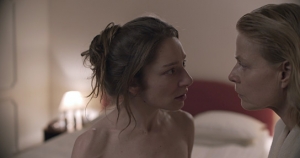 Kathleen Morgeneyer, Corinna Kirchhoff (from left to right) in "Töchter" (2013/14)

Agnes, a teacher from the Hessian provinces, has come to Berlin to identify a dead girl who might be Lydia, her runaway daughter. It turns out not to be Lydia, but Agnes stays in the city anyway. Still frantically looking, she comes a young stray called Ines who no longer leaves her side.

Ines could easily have appeared in Maria Speth's documentary "9 Leben", a portrait of young people who decide to live on the street from an early age. Whereas in "Madonnen" the director told the story of a young woman incapable of taking responsibility for her children whilst continuing to give birth to more, this film is about a caring mother whose daughter is indeed loved, her disappearance leaving behind a blind spot. It is Ines whose provocative behaviour and intrusive questions force Agnes to rethink the relationship between herself and her daughter. The camera is always close by their faces, whether during nocturnal car journeys or hotel room discussions, but also leaves enough space for these two people to collide, drawing each other out of their shells and growing ever closer in quite singular fashion.