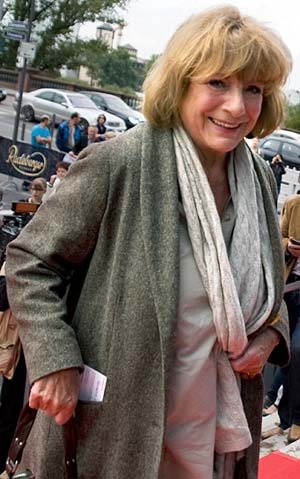 At the reopening of the Deutsches Filmmuseum in Frankfurt, August 12, 2011

Hannelore Hoger, born August 20, 1942, in Hamburg, is one of the most distinctive German character actresses. Her signature roles are straightforward and strong, often determined women, who are often sensitive and funny at the same time.

Hoger's father was an actor and main coordinator at Ohnsorg Theater in Hamburg. Thus, Hoger already made her stage debut at the age of six and played her first larger role at the age of 14. She attended actor's training at Hamburg's Hochschule für Musik und Theater from 1958 on. After her graduation, she performed on stage at theatres in Ulm, Bremen, Stuttgart, Cologne, Berlin, and Hamburg. To refine her acting skills, she repeatedly took lessons from Lee Strasberg. In 1975, the magazine "Theater heute" named her "Actress of the year". Since the 1980s, Hoger has also directed plays, for instance a production of Friedrich Hebbel's "Maria Magdalena" at Stadttheater Darmstadt and a production of Frank Wedekind's "Frühlings Erwachen" ("Spring Awakening") at Vienna’s "Theater in der Josefstadt". In 1989, she turned this production into a TV version. Since 1986, Hoger works as a freelance actress and director.

Most movie goers know Hannelore Hoger from her collaboration with Alexander Kluge. Hoger played her first leading role in a movie in 1968. In "Die Artisten in der Zirkuskuppel: ratlos" ("The Artists Under The Big Top: Perplexed", 1968), she portrayed the reform-oriented but failing circus artist Leni. Shortly after, Kluge finished "Die unbezähmbare Leni Peickert" ("The Undomitable Leni Peikert", 1969) from scenes that were originally intended for "Die Artisten in der Zirkuskuppel: ratlos" but were not used in the end. Afterwards, Hoger played an inspector in space in Kluge's science fiction film "Der große Verhau" ("The Big Mess", 1970), as well as the history teacher Gabi Teichert, who starts to doubt her history books, in "Die Patriotin" ("The Patriotic Woman"), a role that she had already played in the omnibus film "Deutschland im Herbst" ("Germany in Autumn", 1978). "Die Macht der Gefühle" ("The Power of Emotion", 1983) has been the Hoger's last collaboration with Alexander Kluge.

Hoger has also intensively collaborated with Peter Zadek. Together, they made the TV movies "Kleiner Mann - Was nun?" (1973), "Die Geisel" (1977), and "Piggies" (1971). In "Piggies", Hoger played Carla who belongs to a group of cynical and world-weary career-oriented people.

In the multi-part TV movie "Die Bertinis" (1988) that was based on a literary source by Ralph Giordano Hoger made a memorable performance in the role of the Jewish piano teacher Lea Bertini, who is targeted by the Nazis and has to fight for her family's survival in Hamburg during the Second World War. The prolific actress Hoger was also again and again seen in striking supporting roles, for instance, as the physician's wife Trude Bloma in Schlöndorff's film "Die verlorene Ehre der Katharina Blum" ("The Lost honor of Katharina Blum", 1975), or as gossip reporter Charlotte Sanders in Helmut Dietl's "Rossini – oder die mörderische Frage, wer mit wem schlief" ("Rossini", 1996). In the film, Hoger again proved her comedic talent. In "Die zweite Heimat – Chronik einer Jugend" ("Heimat II", 1993), directed by Edgar Reitz, she played the publishing house heiress Elisabeth Cerphal, the owner of "Fuchsbau" that becomes the meeting point of the young artists and thus a central location of the more than 25 hours long film.

In 1993, Hannelore Hoger took over her most popular role, yet. Since then, she plays the committed and experienced inspector Bella Block in the TV crime series of the same name that is intermittently running on ZDF and that deals with current and delicate topics like racism and child abuse. In 1994, Hoger won the Adolf Grimme award in Gold for this role. Furthermore, she won Goldene Kamera in 1998 as "Germany's most popular female inspector". Prior to playing the role of Bella Block, Hoger had made appearances in other crime series, including "Tatort", "Derrick", and "Der Alte". In the cinema epic "Henri 4" ("Henry of Navarre", 2010) she played Katharina de Medici.

The same year, she played a murder victim in the TV thriller "Mörderischer Besuch". Following more "Bella Block" episodes, Hoger starred in the TV productions "Charlotte Link - Das andere Kind", "Uferlos" and "Nichts für Feiglinge", which all aired in 2013. The next year saw Hoger return to the big screen with the satire "Ich will mich nicht künstlich aufregen" ("Asta Upset", 2014) and in Oskar Roehler's "Tod den Hippies!! Es lebe der Punk" ("Punk Berlin 1982", 2015). After her turn in the TV tragicomedy "Frau Roggenschaubs Reise" (2015, TV), Hannelore Hoger was one of the adult leads in a new screen adaptation of the classic children's book "Heidi" (DE/CH 2015). The same year saw her retiring from her successful signature role as Bella Block after a total number of 36 episodes. Instead, she joined Ulrike C. Tscharre and Christoph Maria Herbst as one of the leads of the new TV series "Hotel Heidelberg", which revolves around a volatile mother-daughter relationship.