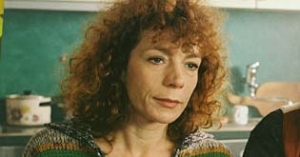 Nina Hoger, born March 24, 1961, in Hamburg, came into contact with acting from childhood on because of her parents, the actors couple Norbert Ecker and Hannelore Hoger. In 1979, the autodidact made her movie debut in the TV movie "Fallstudien", alongside Dieter Krebs and Monica Bleibtreu. Four years later, Hoger who unlike her parents had always focused on a film and TV career caused a stir with her leading role in the film "Flucht nach vorn": Hoger received a lot of critical praise for her performance in the role of a rebellious young woman and also won a German film award. During the 1980s, she starred in several films on the movie screen, including Harun Farocki"s film "Betrogen" or "Der Madonna-Mann", directed by Hans-Christoph Blumenberg, but mainly appeared in TV productions, for instance, alongside her mother in the five-part TV movie "Die Berninis" (1987) about a hunted Jewish family.

Hoger"s rare appearances on the movie screen include her roles in the children"s film "Friedrich und der verzauberte Einbrecher" ("Friedrich and Robin Hood", 1996), in the satirical comedy "Alles Bob!" ("All About Bob"), and in Joseph Vilsmaier"s Third Reich drama "Leo und Claire" ("Leo and Claire", 2001). After a longer break, Hoger finally returned to the movie screen in a leading role in 2008: In the ensemble film "Helden aus der Nachbarschaft" ("Heroes from the Neighbourhood"), Hoger is seen as an emotionally alienated mother and wife.