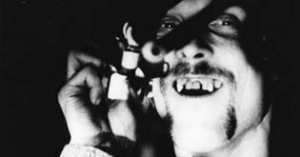 The parallels to the first "Star Wars" film that arrived a few years later are uncanny – and yet the two films could not be more different. As in George Lucas’s space saga, the opening crawl in "Der große Verhau" ("The Big Mess") informs us that a galactic civil war is raging. While the evil empire reigns in "Star Wars", here it is the Suez Canal Company. Resistance comes from the scavengers, smugglers and junk dealers, not unlike the rebels in Lucas’s film. However, Alexander Kluge counters the good vs. evil pathos with a tongue-in-cheek anti-capitalistic nonsense narrative, and Hollywood’s materiel battle with an abundance of creatively designed text panels and wonderful handmade animation techniques. The costumes seem to take more inspiration from the album cover for "Sgt. Pepper’s Lonely Hearts Club Band" than NASA. And krautrockers Amon Düül II provide a suitably contemporary soundtrack. Like every good science fiction film, "Der große Verhau" ("The Big Mess") is first and foremost a story about the time of its creation.