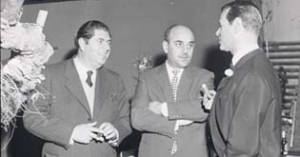 Gottfried Reinhardt was born on March 20th 1913 in Berlin to the renowned Austrian-American director and theatre entrepreneur Max Reinhardt and the German actress Else Heims. After his graduation from high school at the Französisches Gymnasium, he worked as actor and director at the Deutsches Theater which was led by his father. Here he also directed a stage version of Erich Kästner's "Pünktchen und Anton" in 1931 before he emigrated to Hollywood the following year. There Ernst Lubitsch gave him his first unpaid and uncredited job as his assistant director on "Design by Living". Shortly after Gottfried Reinhardt went from Paramount to MGM where he got paid jobs as editor, writer and production assistant. In 1938 he created the draft for the script of "The Great Waltz", an unconventional Johann Strauss film biography, a work which attracted some attention.

With "Comrade X", for which he also wrote the script, Gottfried Reinhardt co-produced his first movie in 1940 which was to be followed by ten more, often star-studded, movies in the next 25 years. In 1941 he produced the romantic comedy "Two-Faced Woman" with Greta Garbo in her last role. Besides his work in the film business Reinhardt also wrote the books for the Broadway musicals "Rosalinda" (1942), "Helen Goes to Troy" (1944) and "Polonaise" (1945) in the first half of the 1940s. Also, after receiving American citizenship, he served the US Army Signal Corps during World War II by making films.

After he left the army he resumed his activity as a producer for MGM and produced among others the romantic war drama "Homecoming" (1948) with Clark Gable and Lana Turner, the drama "The Great Sinner" (1949, directed by Robert Siodmak) set in a Wiesbaden casino with Gregory Peck and Ava Gardner in the starring roles, as well as John Huston's war drama "The Red Badge of Courage" (1951).

In the 1960s Reinhardt established himself as an independent producer. In 1961, the American-German-Swiss co-production "Stadt ohne Mitleid" ("Town Without Pity") was created, a court drama with Christine Kaufmann as the rape victim and Kirk Douglas as the defense attorney of the four accused. This was followed by the comedy "Situation Hopeless - But Not Serious" (1965), an American Comedy filmed and set in Germany and starring Alec Guinness as a German, who in World War II keeps two American pilots, played by Robert Redford and Mike Connors, prisoners in his cellar and doesn't tell them when the war has ended. Gottfried Reinhardt also directed both "Stadt ohne Mitleid" and "Situation Hopeless".

Reinhardt had already appeared as a director from the 1950s onwards. After he had realized the two US-American movies "Invitation" (1952) and "Betrayed" (1954) - the latter also with a top-class cast including Lana Turner and Clark Gable - the Berlin-based producer Artur Brauner brought the emigrant Reinhardt back to Germany for several productions and also made him production manager of his production company CCC Film for a short time. In 1956 Reinhardt directed the drama "Vor Sonnenuntergang" based on the stage play by Gerhart Hauptmann. The film, in which Hans Albers portrays an old industrialist who falls in love with a young woman and thus causes a family crisis, won the audience award at the 1956 Berlinale.

Three years later Reinhardt again directed a CCC production: "Menschen im Hotel" ("Grand Hotel"), a remake of the successful US film of the same name from 1932, back then starring Greta Garbo, was made in 1959 with a star cast that included Michèle Morgan, Sonja Ziemann, O.W. Fischer, Gert Fröbe and Heinz Rühmann. With such a prominent cast, the film received a press coverage already before and during filming that no other German film had ever received before. Both films were also successful at the box office. Also under Reinhardt's direction and produced by CCC, the thriller "Abschied von den Wolken" ("Rebel Flight to Cuba") was made in the same year, and one year later, in 1960 - his last directorial work for CCC - the Renate Müller film biography "Liebling der Götter" ("Sweetheart of the Gods") with Ruth Leuwerik in the leading role, a remake of the film of the same name from 1930.

In 1961 Gottfried Reinhardt directed the Austrian-German co-production "Jedermann" ("Everyman"), a film adaptation of the stage play first staged at the Salzburg Festival by his father. With Ruth Leuwerik, Bernhard Wicki and Paul Hubschmid in the lead roles, he wrote and directed the drama "Elf Jahre und ein Tag" ("Eleven Years and One Day", 1963) about a couple whose marriage crisis escalates when the adulterous wife causes a fatal traffic accident and commits a hit-and-run.

After he had directed "Situation Hopeless - But Not Serious" in 1965, things became quiet around Reinhardt. It was not until the 1970s that he briefly reappeared as a director when he made the German TV documentary "Der große Zauberer - Max Reinhardt" in 1973 about the life and work of his father. One year later he worked again for German television and directed the episode "Im Jagdhaus" of the crime series "Der Kommissar".