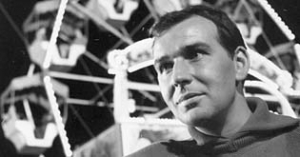 Bernhard Wicki, born October 28, 1919 grew up in Vienna and joined "Bündische Jugend" at the age of twelve. In 1938, he graduated from high school in Bad Warmbrunn in Silesia. Wicki then attended drama school at Berlin's Staatliches Schauspiel. Because of his activities in the young painting class of the Dessau Bauhaus, Wicki was denounced and sent to the Sachsenhausen concentration camp in 1938/39.

He was banned from going to Berlin and instead went to Vienna's Staatsakademie in 1939/40. Wicki appeared as an extra in the film "Der Postmeister" ("The Stationmaster") before he made his stage debut in 1940 in Schönbrunn. He also performed in Bremen and in Munich. In 1943, he landed a role at Salzburg Festival. From 1944 to 1950, he performed at theatres in Zürich and in Basel before he went to Munich's Staatstheater in 1950. In Munich, he also became a successful photographer.

In 1950, Wicki starred in Harald Braun's film "Der fallende Stern" ("The Falling Star"). And in 1953/54, he turned in a successful performance as a Yugoslavian partisan leader in Helmut Käutner's film "Die letzte Brücke" ("The Last Bridge"). Wicki then went on to become Käutner's assistant director for "Monpti" (1957). He made his directorial debut with the film "Warum sind sie gegen uns?" about the problem of teenage delinquents that won the German film award in 1959. Wicki then attracted international attention as the director of the multiple award-winning anti-war film "Die Brücke" ("The Bridge", 1959). He also directed the film "Das Wunder des Malachias" ("Miracle of Malachias"), a satire about the era of the "Wirtschaftswunder" years in Germany, that won the German film award in 1962, among other awards. Wicki also directed international productions, for instance, the German episodes of "The Longest Day" and the European co-production "Der Besuch" ("The Visit"), based on Friedrich Dürrenmatt's play.

In 1970, Wicki started to direct TV movies, including the film "Das falsche Gewicht" ("The False Weight"), based on Joseph Roth's novel. He won further German film awards for his films "Die Eroberung der Zitadelle" ("The Conquest of the Citadel") and "Die Grünstein-Variante". Wicki's last films as a director were the TV movie "Sansibar oder Der letzte Grund" based on the novel by Alfred Andersch and "Das Spinnennetz" ("Spider's Web") based on a novel by Joseph Roth. The film won the German film award in 1990, among other awards.

As an actor, Wicki appeared in films by Peter Schamoni, Rainer Werner Fassbinder, Hans W. Geissendörfer, Thomas Brasch, Andrzej Wajda, and Wim Wenders, among other directors, and often made hulking guest performances in the style of Orson Welles. Furthermore, Wicki worked as dubbing voice and director, and directed several theatre productions, for instance, at Vienna's Burgtheater. In 1977, he again performed at Salzburg Festival. In 1976, he was awarded with the honorary award "Filmband in Gold" for his continued outstanding individual contributions to the German film over the years.