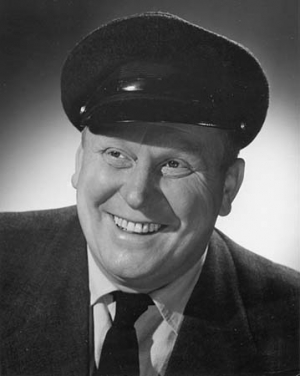 Karl Gerhart Fröbe was born in Planitz on the 25th of February, 1913. After finishing school, Fröbe, a talented painter who wanted to become an actor, completed a three-year apprenticeship as painter and was employed at the Staatstheater in Dresden. After taking acting lessons from Erich Ponto, who he followed to Berlin in 1936, he continued to take acting lessons there from Paul Günther, finally completing his acting studies under Lothar Müthel in the same year. Following engagements at the Städtischen Bühnen in both Wuppertal (1937/38) and Frankfurt (1938/39), he travelled to Vienna, where he performed at the Volkstheater during the next four years. Here he first came in contact with film, playing the role of a farmer in "Die Kreuzlschreiber" in 1944. In the film "Berliner Ballade" (The Ballad of Berlin), the thin Fröbe took on his first main role, playing a loyal helpless veteran returning home from the war. Fröbe eventually became known as "the normal Joe on the street", who dreams of love and mountains of cakes.

With few film offers, Fröbe – as a member of the Artists Lodge – worked predominantly in parody and as a jongleur for circus and variety audiences. Playing a number of big supporting roles in French films, Fröbe finally achieved a high degree of popularity as well as work in German cinema. Besides playing brutal villains, he also appeared as inspector in three "Dr. Mabuse" films. He achieved international fame with his role as "Goldfinger", the constantly sweating inhuman monster in the third James Bond film.

From 1971 onwards, Fröbe worked increasingly in the German Federal Republic, performing in the film "$" by Richard Brooks in Hamburg as well as in the film "Das Schlangenei" (The Serpent's Egg) by Ingmar Bergman in Munich. While making his comeback in German productions with the children’s film "Der Räuber Hotzenplotz", Fröbe’s most important forum became once again variety entertainment. He continued to perform in a few selected films made possible by the production unit of the Polyphon Film and Television Company (Film- und Fernseh-GmbH) in Hamburg.

Gert Fröbe was married five times and had two sons. Taken ill during the mid-1980s with lung cancer, he died of a heart attack in Munich on September 5th, 1988.