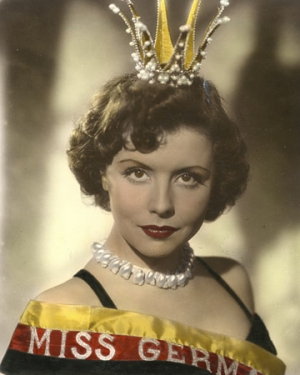 Sonja Ziemann was born in Eichenwalde on February 2nd 1926. After taking dancing lessons, she gave her stage debut in 1941 and subsequently appeared in numerous operas and revues. After the war, she successfully performed in the theatre as well.

At the end of the 1940s, her star began to rise and she became one of the most popular movie actresses of the time. Early on, Ziemann was pigeonholed into the role of the nice girl, and together with leading man Rudolf Prack, she formed a dream pair of German post-war cinema: Starring Ziemann and Prack, films like "Schwarzwaldmädel" and "Grün ist die Heide" were huge box-office hits.

From the later 1950s on, Ziemann successfully freed herself from the stereotype and proved her talent in different roles. She appeared in Frank Wysbar's war dramas "Hunde wollt ihr ewig leben" and "Nacht fiel über Gotenhafen", and also starred in international productions like "The Secret Ways" and "The Bridge at Remagen".

From the mid-1960s on, Ziemann only made a few films and her career shifted mostly to television work. She played her last TV role in two episodes of the series "Park Hotel Stern".

Sonja Ziemann was married three times, her last marriage with actor Charles Regnier lasted from 1989 until his death in 2001.