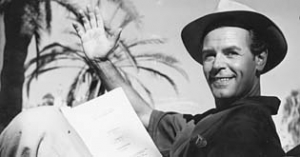 Otto Wilhelm Fischer was born April 1, 1915, in Klosterneuberg near Vienna. After finishing school in 1933, he started to study but dropped out and attended actor's training at the Reinhardt seminar in Schönbrunn in 1936.

Fischer initially became a cast member of Theater in der Josefstadt but went to Munich in 1937 to work for Otto Falckenberg's Kammerspiele. Then, from 1938 to 1944, Fischer was a cast member of Deutsches Volkstheater in Vienna. He played his first larger movie parts in 1939 and 1940, respectively, in the comedies "Anton der Letzte" ("Anthony the Last") and "Meine Tochter lebt in Wien" ("My Daughter Lives in Vienna"), both directed by Hans Moser. In these and his following films until 1945, Fischer mainly played innocuous, yet likeable young men.

On August 13, 1942, Fischer married the actress Anna Usell. His first major post-war movie success was the title role in "Erzherzog Johanns erste Liebe" (1950). In the following years, Fischer became the highest paid actor in the German cinema of the 1950s alongside Curd Jürgens. Fischer also formed the most appealing movie couples with Maria Schell, and, later on, with Ruth Leuwerik. After being guaranteed to have a say in his parts, Fischer soon started to bear influence on the parts he played and expressed his knack for positively ambiguous characters. In 1954, he played Bavarian king "Ludwig II." which became his signature role. In 1955, Fischer played a similar kind of character as a psychic and Nazi minion in the title role of "Hanussen", a film Fischer also directed.

Although his Hollywood career ended before ist began, and his popularity in Germany temporarily dropped, Fischer soon recovered and started to appear in comical and self-mocking parts and played, for instance, Bluntschli in "Helden" ("Arms and the Man", 1958) and the thief "Peter Voss" (1959). After working in Spain and Italy during the mid-1960s, Fischer more and more retreated from the film industry. He then occasionally appeared on TV and performed at the theatre. In 1970, he was bestowed with the title of a professor in Vienna for studies he had conducted privately.