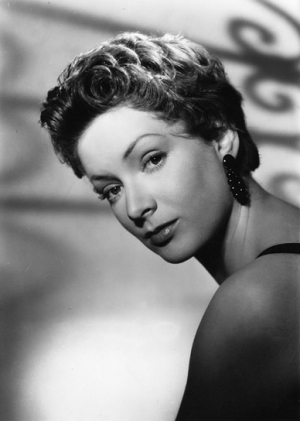 Ruth Leuwerik, born April 23, 1924, in Essen, attended secondary schools for girls in Essen and in Münster, and later went to commercial college. Besides, she took private acting lessons and toured Westfalia as a member of Westfälisches Landestheater Paderborn from 1943 to 1944. In 1944, she became a cast member of Städtische Bühnen Münster. Later, she performed at Theater der Freien Hansestadt Bremen, at Städtische Bühnen Lübeck, and, from 1949 to 1953, at Hamburg's Deutsches Schauspielhaus.

Besides the discreet Borsche, O.W. Fischer and Hannes Messemer became her most prominent film partners. With her representation of self-confident, emancipated women, Ruth Leuwerik soon emerged as a counterpart to the more emotional actress Maria Schell. Seven of her films were directed by Wolfgang Liebeneiner, their most successful collaborations include "Die Trapp-Familie" ("The Trapp Family", US remake 1964: "The Sound of Music") and "Taiga".

In 1960, Leuwerik was the first German actress to participate in the "Royal Performance" but she passed up an offer by Universal to go to Hollywood. She increasingly starred in films that dealt with the behavioral role of women typical of the time: In "Immer wenn der Tag beginnt", she played a teacher romantically involved with a pupil, while "Die ideale Frau" ("The Ideal Woman") dealt with women engaging in politics, and "Dorothea Angermann" dealt with a woman who had killed her unloved husband in self defense.

Also in 1960, Leuwerik played the actress Renate Müller who had died in 1937 under mysterious circumstances in Gottfried Reinhardt's film "Liebling der Götter" ("Sweethearts of the Gods"). The haunting representation of the Ufa star's inner moral dilemma who was torn between a successful movie career in Nazi Germany and her love to a Jewish emigrant is considered to be the artistic highlight of Leuwerik's movie career.

In the early 1960s, Ruth Leuwerik also took the opportunity to prove her comedic talent as a smart aristocrat in "Eine Frau fürs ganze Leben", and as Heinz Erhardt's wife in "Das Haus von Montevideo" ("The House in Montevideo").

After a foray into crime films – as the wife of an industrialist in the drama "Elf Jahre und ein Tag" ("Eleven Years and One Day") about a hit-and-run accident or as an attorney alongside Peter van Eyck in "Ein Alibi zerbricht" ("An Alibi for Death") – Leuwerik focused on her TV career. After a seven-year hiatus, she finally took another offer to appear on the movie screen and played the tender murderess Valerie Steinfeldt in "Und Jimmy ging zum Regenbogen" ("And Jimmy Went to the Rainbow"s Foot"), based on Johannes Mario Simmel's novel, in 1970. So far, her last film on the movie screen was the adaptation of Thomas Mann"s "Unordnung und frühes Leid" ("Disorder and Early Torment") in 1976.

Her TV appearances of the 1970s include guest performances in the TV crime series "Der Kommissar" and "Derrick", as well as the role of the consul's wife in Franz Peter Wirth's multi-part TV film version of "Buddenbrooks". During the 1980s, Ruth Leuwerik withdrew from acting and became involved as the chairwoman of the selection commission for the Bavarian film awards and as the patroness of Johanniter-Unfall-Hilfe.