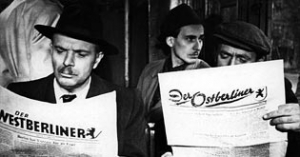 A satirical parable of post-war German reality, presented as a "flashback" from the year 2048: Gert Fröbe plays the common German man on the street named "Otto Normalverbraucher", who, once released from captivity in 1949, returns in roundabout ways to Berlin, where he must come to terms with post-war reality. He meets black-marketeers and reactionaries, looks for work and food and finally he even finds his "dream woman".
For this film, screenplay writer Günter Neumann adapted his own successful cabaret program "Schwarzer Jahrmarkt", the "Revue der Stunde Null".