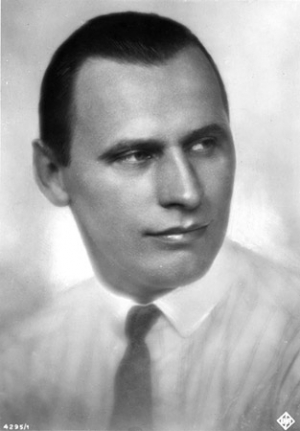 Fritz Heinrich Rasp was born in Bayreuth on May 13 1891. He attended the acting school Otto König in Munich and gave his stage debut in 1909 at the Schauspielhaus.

In 1915, Rasp first appeared in the movies, followed by small parts in Ernst Lubitsch' "Schuhpalast Pinkus" and Paul Wegener's "Hans Trutz in Schlaraffenland". But his real breakthrough as a screen actor came in 1922, when he played one of the main characters in Fred Sauer's adaptation of the play "Jugend".

While he was extremely versatile on stage, the screen actor Fritz Rasp – lean and tall with a narrow mouth and sunken eyes – is quickly typecast as the villain, a role which he often managed to subvert by adding layers of irony and psychological depth to his characters.

He was frequently cast cast by Fritz Lang, who gave him prolific roles in "Metropolis", "Spione" and "Frau im Mond", and by Wilhelm Dieterle, who directed Rasp in "Die Waise von Lowood" and "Schinderhannes". Moreover, Rasp gave some of his most memorable performances in films by G. W. Pabst, such as "Die Liebe der Jeanne Ney", "Tagebuch einer Verlorenen" and "Die 3-Groschen-Oper". And in Gerhard Lamprecht's "Emil und die Detektive", he played the iconic role of the thief Grundeis.

During the Nazi reign, Rasp tried to avoid being cast for propaganda films by working in Austria and by predominately seeking roles in comedies and crime capers. He also returned to the stage, and continued to work in the theatre in the post-war years.

From 1955 on, Rasp appeared in TV-productions on a regular basis. In 1959, he was cast for "Froen med Masken", one of the first movies in the hugely popular cycle of adaptations of crime novels by Edgar Wallace. The success of these films gave Rasp the opportunity to re-cultivate his trademark role of the charismatic villain.

Being wildly ignored by the maverick directors of the New German Cinema, Rasp nevertheless experienced a late triumph when Bernhard Sinkel cast him as a charming, smart and sweet old-timer in the acclaimed comedy "Lina Braake".