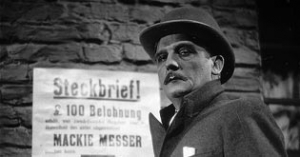 London′s underground world: the elegant gang boss Mackie Messer falls in love with the beautiful Polly, daughter of beggar king Peachum, and plans to marry her. In a dusty underground warehouse - the room lavishly prepared with goods stolen from London′s top shops - the wedding is attended by a crowd of beggars and thieves, as well as Tiger Brown, police chief and Mackie′s best friend.
Peachum, however, strongly opposes the marriage. He puts pressure on Tiger Brown to send Mackie to the gallows, threatening to organize a beggars′ revolt to disrupt the queen′s upcoming coronation if the police chief does not accede to his wishes.