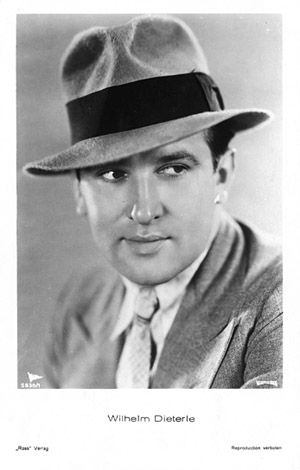 Wilhelm Dieterle was born in Ludwigshafen on July 15th 1893. The son of a factory worker and farmer, he completed an apprenticeship as a carpenter before he started taking acting classes in Mannheim. In 1911, he made his stage debut at the Westphälische Städtebundtheater zu Arnsberg. Because he also had to work as a stage hand, he constantly wore white gloves – which later became his "trademark" in Hollywood. Through the following years, Dieterle played at several theatres before he experienced his breakthrough under the direction of Max Reinhardt at the Deutsche Theater.

From 1920 on, Dieterle also regularly appeared in movies, and apart from acting, he soon started to direct and write as well. In 1927, he co-founded the production company Charha-Film GmbH Berlin together with his wife Charlotte Hagenbruch. After several commercially successful feature films – with Dieterle at the helm as producer, director and star –, Hollywood took notice of the filmmaker: In 1929, Charha closed a production deal with the German subsidiary of Universal.

In 1930, Dieterle relocated permanently to California, where he directed German-language versions for First National Pictures, a division of Warner Bros. He was put under a seven year contract by Warner in 1933, and was thus able to establish himself as a prestigious director of biopics. In 1937, Warner Bros sent the naturalized American William Dieterle to Moscow, where he studied the production methods at Lenfilm. From 1938 to 1940, he taught at the "The Max Reinhardt Workshop of Stage, Screen and Radio" in Los Angeles. In 1939, he co-financed and co-conceived the anti-fascist magazine "The Hollywood Tribune", which was run by his friend E. A. Dupont, and founded the English-language theatre group "The Continental Players", which consisted of immigrants and was directed Leopold Jeßner.

In order not to be pigeonholed into the biopic genre, Dieterle severed his ties with Warner, and from 1941 –42, he ran the unsuccessful William Dieterle Production Co. at RKO. Between 1951 and 1956, Dieterle worked for M-G-M, Selznick, Paramount and Columbia, while the founding of his own Pandora-Film Corp. in 1951 wielded no results. In 1958, Dieterle returned to Germany and immersed himself in numerous theatre projects. He also frequently worked as a director for German and Austrian television, while he shot his last feature film in 1964. In 1965 – after all hopes of returning to the US as a film director have vanished –he bought the travelling theatre group "Der grüne Wagen". After the death of Charlotte Hagenbruch in 1968, he ran the theatre with his second wife Elisabeth Daun.

Wilhelm (William) Dieterle passed away in Ottobrunn near Munich on December 8th 1972.