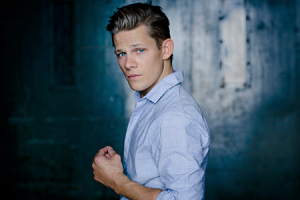 Maximilian Graf von der Groeben was born in Cologne on 15 January 1992 to TV news presenter Ulrike von der Groeben and sports journalist Alexander von der Groeben. His parents brought him into contact with the media world at an early age. He played his first role in the RTL comedy series "Bernds Hexe" (2004-2005), as the son of the family the series revolves around. In the loose fairytale adaptation "Rotkäppchen" (2005, TV) he played the best friend of Little Red Riding Hood. But it wasn't until 2010 that von der Groeben appeared regularly in front of the camera, initially mainly for television productions. For his portrayal of a cognitively disabled student in "Inklusion - gemeinsam anders" (2011, TV), he was nominated Best Young Actor for the Günter Strack Television Prize and for the German Actor Prize. He also appeared in a number of TV series, including a leading role as a rapist in the feature-length episode "Eine andere Welt" (2012) of the "Polizeiruf 110" crime series. For this part he again received a nomination for the Günter Strack Television Award.

In 2013 Max von der Groeben began his acting studies at the Otto-Falckenberg-Schule in Munich - in addition to his extensive work for TV and film. He played his first feature film role in the box-office hit "Fack ju Göhte" ("Suck Me Shakespeer", 2013), as the leader of a rebellious school class that is set on course by its new, unconventional substitute teacher. He reprised this role in the comedy’s two sequels "Fack ju Göhte 2" ("Suck Me Shakespeer 2", 2015) and "Fack ju Göhte 3" ("Suck Me Shakespeer 3", 2017), winning him the Bavarian Film Prize together with his co-stars Aram Arami and Lucas Reiber. He had leading roles in Marco Petry's coming-of-age film "Doktorspiele" ("Playing Doctor", 2014), in Tim Trachte's bawdy teen comedy "Abschussfahrt" (2015) and in Max Färberböck's "Mia san jetz da wo's wehtut" (2016), an episode of the "Tatort" crime series, as the saviour of a Romanian prostitute. As the cool Freddy, he also belonged to the ensemble of Detlev Buck's four "Bibi & Tina" films (2014-2017). In 2017, after graduating from the Otto Falckenberg School, he went to New York to study at the Lee Strasberg Institute.

In 2019 Max von der Groeben had a leading role in the kidnapping thriller "Kidnapping Stella", which was released on Netflix only. He then played a lead part in the movie "Auerhaus" (2019), about four teenagers who share a house in the countryside after graduating from high school in order to escape from their previous lives, which they find restrictive.