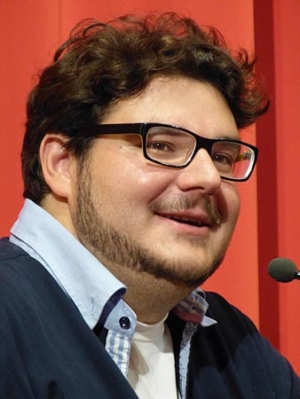 Axel Ranisch in the Deutsches Filmmuseum, Frankfurt am Main, October 20, 2013

Axel Ranisch was born in Berlin in 1983. In 2002, he made his first short on an impulse after a theatre workshop he wanted to attend was already full. Immediately fascinated by the medium, he eventually enrolled at the HFF Potsdam Babelsberg, where Rosa von Praunheim and Andreas Kleinert were among his teachers. Over the next years, Ranisch completed about eighty shorts, and also occasionally moonlighted as an actor in feature films like "Résiste - Aufstand der Praktikanten" ("Resist! – Rebellion of the Interns", 2009) and "Ruhm" ("Glory – A Tale of Mistaken Identities", 2011).

On his own films, Ranisch always tries to shoot scenes in a chronological order, usually without a script and relying heavily on improvisations. In 2011, he co-founded the production company "Sehr gute Filme" together with actor Heiko Pinkowski, DoP Dennis Pauls and producer Anne Baeker. The company's first project was Ranisch's graduation feature "Dicke Mädchen" ("Heavy Girls"), which went on to win the Special Prize of the Jury and the Filmmaker Choice Award at the 2012 Slamdance Festival, as well as a special award at the 2012 German Short Film Award.

Ranisch's follow-up, the tragicomedy "Ich fühl mich Disco" ("I Feel Like Disco"), was released in 2013. In addition to this, He also directed two opera productions and starred as one of the leads in the TV series "Zorn". His next film, the fairy-tale-like "Reuber", premiered at the 2013 Munich Film Festival and was released in the Spring of 2015. The same year in the fall, Ranisch put out yet another movie: The tragicomedy "Alki Alki" portrays a family man who is stuck in a downward spiral of binge drinking.