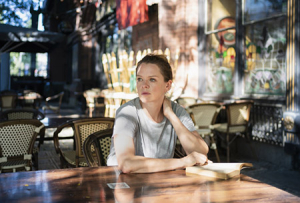 Julia von Heinz was born in Berlin in 1976. She was trained as a media designer at the WDR TV network in Cologne, and then studied audio-visual media at the TFH Berlin, graduating as a DoP. During her studies, she completed the award-winning shorts "Dienstags" (2001), "Doris" (2002) and "Lucie und Vera" (2003).

From 2005 to 2006, Julia von Heinz worked as creative assistant of Rosa von Praunheim at the HFF Potsdam-Babelsberg. Her feature film debut "Was am Ende zählt" premiered in the section "Perspektive deutsches Kino" at the 2007 IFF Berlin. The drama about a young runaway whose life is in downward spiral won the German Film Award for Best Children Film and was lauded at several international festivals. This was followed by her documentary "Standesgemäß" (2008), which depicted the everyday worries of single noblewomen and went on to win the Bavarian Television Awards. Julia von Heinz then directed "Hanni und Nanni 2", the sequel to the box-office hit about twin teenage sisters and their adventures at a boarding school. In the same year von Heinz graduated as Ph.D.

After the multiple award-winning "Hanni & Nanni 2", Julia von Heinz focused on more "mature" themes in her next feature film "Hannas Reise" ("Love Israel", DE/IL 2013) which she also co-authored. The story is about a young German woman who tries to use a social work project in Israel to advance her own career but is unexpectedly confronted with her own responsibility as a German born after the Holocaust.

Heinz made the biopic "Katharina Luther" (2017) for television, and won a special prize for directing at the Baden-Baden Television Film Festival. In her episode "Für immer und dich" of the long-running German crime series "Tatort", about addiction and the abuse of a teenager (Meira Durand), Julia von Heinz cast women in supporting roles that the script author Magnus Vattrodt had originally written for men. By doing so she set decisively different accents with regard to the main character. This episode was also awarded at the Baden-Baden Television Film Festival: for Best Screenplay and with the Hans Abich Award for "outstanding services to the television film".

An autobiographical touch had Julia von Heinz' next feature film "Und morgen die ganze Welt" ("And Tomorrow the Entire World" 2020), about a political student who joins the Antifa. The film celebrated its premiere at the Venice International Film Festival and was released in German cinemas in October 2020. It won several festival awards - including the Bisato d'Oro for Mala Emde in Venice and the Silver Hugo for Best Ensemble in Chicago - and entered the race for the Oscars® 2021 as the German entry.