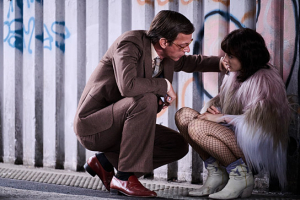 Sebastian Rudolph was born in Berlin in 1968 to actress Hildegard Schmahl and director Niels-Peter Rudolph. From 1989 to 1990 he trained to be an actor at the Schauspielstudio Frese in Hamburg. In the following years, he appeared on stage in various theaters, among them the Theater Basel (Switzerland), the Berliner Ensemble, the Schaubühne Berlin, the Deutsches Theater Berlin, the Volksbühne Berlin, the Schauspielhaus Hamburg and Vienna's Burgtheater. Productions he starred in range from "Leonce and Lena" to "Drei Schwestern" ("Three Sisters") and "Heinrich IV" ("Henry IV") to Karmakar's "Die Nacht singt ihre Lieder" ("Nightsongs"). Christoph Marthaler, Luc Bondy, Robert Wilson, Christoph Schlingensief and Schorsch Kamerun are just a few of the renowned directors, Rudolph has worked with.

In addition to his work in theater, Rudolph has also been starring in film and TV productions. His first role in a feature film was the lead role in Peter Timm's comedy "Manta – Der Film" (1991), in which he played a 17-year-old student driver. Following this, he starred in a major role in Joseph Vilsmaier's war drama "Stalingrad" (1992). Except for a minor appearance as an officer in "The English Patient" (US/GB 1996), in the following years Rudolph worked almost exclusively for TV.

In the 2009/2010 season, Rudolph joined the Thalia Theater ensemble in Hamburg and was elected Actor of the Year in 2012 by the theater magazine 'Theater heute' for his much-acclaimed performance in "Faust I+II".

Despite his on-stage work, he also kept appearing in front of the camera, like in Markus Imboden's "Tod einer Brieftaube" (2012, TV), in which he played a kidnap victim. He starred in another important role in Roland Suso Richter's "Die Spiegel-Affäre", portraying the 'Spiegel' magazine editor Rudolf Augstein. Sherry Hormann cast him for her political conspiracy thriller "Tödliche Geheimnisse" ("Deadly Leaks", 2016) in a supporting role as an idealistic editorial journalist.

On the big screen, Rudolph starred in smaller roles in the adolescence drama "4 Könige" ("4 Kings", 2015) and in the relationship drama "Gleißendes Glück" ("Original Bliss", 2016). In the award-winning "Whatever Happens Next" (DE/PL 2018), he played the lead role of a father, who leaves his family to live as a friendly good-for-nothing and impostor.