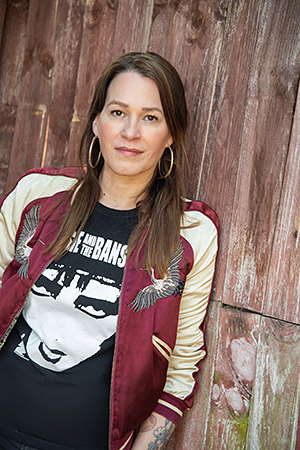 Franka Potente was born July 22, 1974, near Dülmen in Westfalia, as the daughter of a teacher and a medical technical assistant. The family name goes back to a Sicilian great-grandfather. After finishing high school in Dülmen, Potente went to Munich in 1994 to attend actor's training at Otto-Falckenberg-Schule. During her studies, she was discovered by a casting agent and made her debut on the movie screen in 1995 in Hans-Christian Schmid's film "Nach fünf im Urwald" ("It's A Jungle Out There"). Potente won a Bavarian film award for her performance in the role of a young runaway who returns to her parents" home after several bleak experiences in the big city.

She dropped out of drama school in Munich to continue actor's training in New York at Lee Strasberg's school. Potente now regularly received role offers, mainly for TV productions. She played a single mother in "Coming In", a reporter in the two-part TV movie "Opernball" ("Opera Ball"), and a lesbian ski racer in "Rennlauf".

At that point, Potente was considered to be a "girl wonder" that "brought a certain hint of youthfulness and reality into German cinema that had been missing for a long time" (Süddeutsche Zeitung, August 24, 1998). Magazines praised the actress's charisma: "Potente is neither a sex bomb nor a sunshine girl. She has the authentic beauty of next door's girl. Plus, she is self-confident, cool, and not at all bitchy. That's what the people like." (Libro Journal, Nr. 2, 2000)

In Doris Dörrie's "Bin ich schön?" ("Am I Beautiful?", 1998), Potente played a young woman who hitchhikes through Spain and pretends to be deaf-mute. In Friedemann Fromm's film "Schlaraffenland" ("Paradise Mall"), she came under permanent fire as the security officer of a shopping centre. In "Anatomie" ("Anatomy"), she sawed up dead bodies as an ambitious medicine student in anatomical pathology and disclosed a mysterious doctors union. The box office hit received held back reviews, however, Potente made a convincing performance as a sort of shy, young woman of good family who only cares about her studies but then has to prove her instincts and her perseverance.

Tom Tykwer, her companion at the time, directed "Der Krieger und die Kaiserin" ("The Princess and the Warrior"). In the film, Potente played a nurse who starts to search her life saviour. The international success of Tykwer's films paved the way to Potente's Hollywood debut in "Blow", the life story of the drug dealer George Jung (Johnny Depp). In the spy films "The Bourne Identity" (2000/01) und "The Bourne Supremacy" (2003), Potente starred alongside Matt Damon.

In 2007, Franka Potente was nominated as Best Actress by the Australian Film Institute for her performance in "Romulus, My Father". She also appeared in the highly popular US series "The Shield" (2007) and "Dr. House" (2009), while memorable screen roles include her turn as revolutionary Tamara Bunke in Steven Soderbergh's "Che" (2008) and as dedicated Nazi hunter Beate Klarsfeld in "La Traque" (2008).

Franka Potente next appeared in the feature film "Valerie", which was based on a story by Roger Willemsen and was released in September 2011. In the same year, she also starred in the titular role of the TV-biopic "Beate Uhse - Das Recht auf Liebe". In the USA, in the following years, she took on important roles in the series "American Horror Story" (2012), "Copper - Justice is Brutal" (2012-2013), "The Bridge - America" (2014) and "Taboo" (2017).

In the horror film "The Conjuring 2" (US 2016) she was a parapsychologist who does not believe in the supernatural occurrences (and is proven wrong), in the fantasy action film "Between Worlds" (US 2018) with Nicolas Cage she was a spiritually inclined mother. Also in 2018, Potente was seen again in a German production: in the road movie "25 km/h", together with Alexandra Maria Lara, she was an amorous wine festival acquaintance of the two main characters.

At the Rome Film Festival in October 2020, Potente presented her first feature-length film as a director: the character and milieu study "Home" is about a murderer who returns to his small California hometown after his release from prison to start a new life. Other festival screenings followed. De reviews were mostly positive, praising especially the realistic staging and the natural acting of the ensemble. "Home" was released in German cinemas in December 2021.