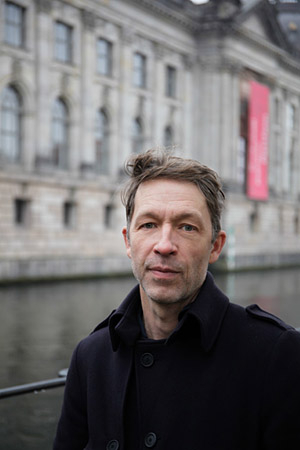 Henner Winckler was born on 8 July 1969 in Gießen. From 1990 to 1993 he studied visual communication with a focus on film at the Hochschule für Gestaltung (HfG) in Offenbach am Main. Subsequently, he studied film at the University of Fine Arts (HfbK) in Hamburg until 1998. After graduating, he moved to Berlin, where he began working as a freelance author, dramaturg and director. Winckler's feature-length film debut "Klassenfahrt" ("School Trip") depicted the everyday events during the class trip of a tenth grade class to the Baltic Sea in a laconic-realistic tone. The film premiered in the Forum of the Berlinale in 2002 and received very positive reviews. At the Entrevues Film Festival in Belfort (France) "Klassenfahrt" won the Grand Prize, at the Sochi International Film Festival (Russia) it was awarded the Special Jury Prize, at the Festival Cinema tout écran in Geneva (Switzerland) the Director's Prize.

Winckler's second feature film "Lucy" (2006), about the conflicts and hopes of an 18-year-old single mother, also premiered at the Forum of the Berlinale. At the FilmKunstFest Schwerin he won the DEFA Foundation's Young Talent Award.In addition to his work as a filmmaker, Winckler became an artistic assistant at the Film University Potsdam-Babelsberg from 2004; he has also been teaching at various universities and institutions. These include the HfbK Hamburg, Filmarche Berlin e.V. and the Met Film School Berlin.

Together with Ulrich Köhler, who, like himself, is assigned to the so-called 'Berlin School', Winckler made his third feature film in 2019: "Das freiwillige Jahr" ("A Voluntary Year"), about a high school graduate in the German province who wants to emancipate herself from the future plans of her single father. The film premiered at the 2019 International Film Festival of Locarno (Switzerland); at the Hamburg Film Festival it won the Producer's Prize. In February 2020, "Das freiwillige Jahr" was released in cinemas.