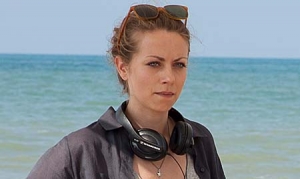 Alice Dwyer was born 1988 as Alice Deekeling in Berlin. She already decided to become an actress at the age of nine: Against her mother's will, she applied for an actors agency while still visiting primary school – and two years later landed the leading role in Ulla Wagner's drama "Anna Wunder" (2000).

At the age of 13, Dwyer caused a stir with her performance in "Baby" (2002): In Philipp Stölzl's drama, she portrayed a Lolita-like 15-year old who seduces one of her father's friends. During the following years, Dwyer starred in a number of TV and movie productions and by smartly choosing from her role offers managed to not be restricted to a certain role type. Thus, she was, for instance, seen as a cigarette smuggler in Hans Christian Schmid's award-winning film "Lichter" ("Distant Lights", 2003), while she played a sensitive teenager in "Das Lächeln der Tiefseefische" ("The Smile of the Monsterfish", 2005), and a budding pickpocket in "Was ich von ihr weiß" (2006), a mother-daughter-story.

At the start of 2008, Dwyer won the award as "Best actress" at the Film Festival "Max Ophüls Preis" for her performances in the films "Höhere Gewalt" ("Act of Violence") und "Die Tränen meiner Mutter" ("My Mother's Tears"). One year later, she returned to Saarbrücken with the film "Torpedo" that won the award as "Best mid-length film".

During the following years, she guest-starred in several TV series ("Der Dicke", "Der Kriminalist"). She impressed critics and audiences alike with her performance as an enigmatic, seemingly dishevelled young woman in Wolfgang Fischer's drama" Was Du nicht siehst" ("What You Don't See", 2009). Shortly afterwards, she played young Canadian Eve in Jesper Petzke's "Wie Matrosen" which entered the competition of Film Festival "Max Ophüls Preis". She again got rave reviews for her portrayal of a young Jewish woman who escapes from a Nazi death camp and is thus separated from her friend in "Die verlorene Zeit" ("Remembrance", 2011). Dwyer went on to play the role of an adventurous waitress, who fatefully falls for an Italian mobster, in "Ein ruhiges Leben" ("A Quiet Life", IT/D/F), which was released in Germany in Spring 2012.

In the meantime, she acted in TV-productions as well as in shorts like "Neiiiiiin" and "Eine lange Nacht", yet never abandoned the theatrical feature film. In September of 2012, she could be seen in Rudolf Thome's "Ins Blaue". She starred as a young director who during shooting her first movie has trouble keeping the spheres in front and behind the camera apart. In the fall of the same year, Dietrich Brüggemann's "Drei Zimmer, Küche, Bad" and Felix Stienz's "Puppe, Icke & der Dicke" were released in German theatres, both of which feature the actress in supporting roles.

The latter, as well as the short film "Eine lange Nacht" premiered at the Film Festival Max Ophüls Preis in 2012. Dwyer was nominated for the German Film Critics' Award in 2013 for "Ins Blaue" and "Drei Zimmer, Küche, Bad". Her supporting role in the crime thriller episode "Spuren des Bösen - Racheengel" (2012) also earned Dwyer a nomination for the German Television Academy Award; for her lead role in "Im Alleingang - Elemente des Zweifels" (2013) she received a nomination for the German Television Award in 2013.

Dwyer had a leading role alongside Sabin Tambrea in the Austrian-French production "Ma folie" (2015), a mixture of romantic drama and psychological thriller. At the Filmkunstfest Mecklenburg-Vorpommern, Dwyer was awarded the prize for best acting performance for "Ma Folie". In the award-winning children's and youth film "Winnetous Sohn" ("Winnetou's Son", 2015) she played the mother of the young hero.

In the following year, "Am Ende ist man tot", which had already been filmed in 2015, was released in cinemas. At the same time, Dwyer made appearances in guest roles in a few TV series. From 2018, she played the titular (and married) investigator duo in the new crime series "Herr und Frau Bulle" together with Johann von Bülow. In the TV comedy "Der Liebhaber meiner Frau" (2020) she was part of the main cast as the daughter of Christian Kohlund and Suzanne von Borsody.