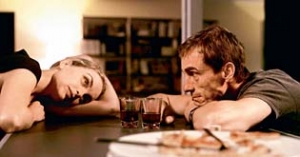 Something to Remind Me

Toter Mann ("dead man" in English and the German expression describing the position of a swimmer floating on its back, legs together with arms stretched out to the side) opens in a thermal spa where a young woman is floating in that very same position. Her name is Leyla. A man observes her. He meets her again and falls in love with her. His name is Thomas and he′s a lawyer. But after their first night together, Leyla vanishes. She later re-surfaces in another city, gets a job in a factory canteen and meets another man. His name is Blum and he has spent the last fourteen years in prison and undergoing psychiatric treatment. But now, given another chance in life, he is taking part in a re-socialization program.

Thomas, meanwhile, is looking for Leyla and finds a clue. He pursues it and is led to Blum, who also happens to be his client. As he realizes the connection it is almost too late. Leyla and Blum have disappeared.