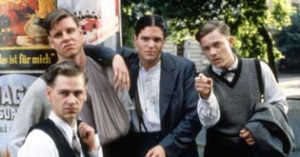 And Nobody Weeps For Me

And Nobody Weeps for Me is the chronicle of one of the typical tenements on the edge of Munich, nestling among quiet streets, railway tracks and junk tip. All kinds of people live in this tenement block: craftsmen, sales reps, minor officials. This is the milieu where the actual "hero" of this story, Leo Knie, grows up. He doesn′t attract particular attention, neither in a positive or negative way; he goes to school, has his boyhood adventures, becomes a trainee electrician, tries to get to know the opposite sex, loses his footing in the crisis of the 20s. He has nobody who can lead him and give him advice; he is, basically, all alone.

Meanwhile, the life of pretty Marilli Kosemund is closely linked with Leo′s story. She isn′t anything special either; only, she has lived her life too quickly. But while Leonhard commits suicide in the face of his loneliness and helplessness, another catastrophe descends on his fellow tenants and contemporaries...from which only a few survive, including Marilli. The tenement house may have survived the nights of bombing, but the old times are gone.