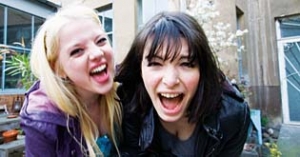 Two girls, Ari and Oona, dream of breaking free. The Baron, frontman of their favourite band "Tier" sings: "We sense everything, you won’t fool us. We are desire, lust and instinct…" But in the girls’ respective families, nobody feels, and nobody talks. Ari’s mother refuses to admit that her kids have grown up, and her brother terrorises the family. Lolita-like Ari makes up for the affection she misses at home by having sex with grown up men and vying for the attention of the mysterious, black-clad Oona. For her part, Oona feels guilty about her Dad’s suicide, scratches her arms until they bleed and expresses her violent fantasies in wild and dark charcoal paintings.

Following their instincts, the two girls go on a manhunt, sneaking through the urban jungle to dance with the Baron and bare their teeth. "We’re one of a kind. We understand each other intuitively. Because we are the same species." The girls’ friendship helps Oona externalise her anger and allows Ari to gain a sense of self-respect at last.

But then Ari starts having an affair with Oona’s hated uncle Lukas. When Oona catches them red-handed one day, she is deeply hurt and withdraws into her shell again. Both girls realise that they’ve only one last chance to save their friendship … "Never forget. I could just eat you. For I am unpredictable!"